The Math Game would not be possible without the continued support of our co-sponsors: Art of Problem Solving, Wolfram Research, Maplesoft, the Pacific Institute for Mathematical Sciences (PIMS), Texas Instruments, and John Wiley & Sons, who donate the following:

Art of Problem Solving (AoPS) is the Online Community Sponsor of The Math Game, and provides gift certificates to all participating schools. Visit The Math Game (formerly Who Wants to Be a Mathematician) discussion forum on AoPS. Since 2003, AoPS has developed a wide range of educational materials for outstanding K-12 math students. Its online community at aops.com has over 350,000 members and hundreds of thousands of visitors each month. AoPS's textbooks have been used by tens of thousands of students, including many winners of major math national contests, and its online school serves thousands of students each year with courses in middle school and high school math, contest preparation, and computer science. AoPS's Beast Academy offers a complete, rigorous math curriculum for grades 2-5, and in 2016, AoPS Academy opened its doors, bringing the depth and rigor of the AoPS curriculum to the classroom. Below, AoPS's CEO, Richard Rusczyk, welcomes and congratulates the contestants in the 2018 Championship.

Wolfram, creator of Mathematica, Wolfram|Alpha and the Wolfram Language, is one of the world's most respected software companies. A pioneer in mathematical computation and modern data science, Wolfram pursues a long-term vision to research and develop the tools to make computation an ever-more-potent force for generations to come. Wolfram technologies are widely used in education, and the company actively promotes computational thinking through its Wolfram High School Summer Camp, along with the freely available Wolfram Challenges and Wolfram|Alpha websites for problem solving and education. Wolfram Research donates one-year licenses to Mathematica, Wolfram Programming Lab, and Wolfram|Alpha Pro to each student who takes The Math Game qualifying test and successfully completes three Wolfram Challenges.

Maplesoft donates two copies of the latest version of its software, currently Maple 2019, to The Math Game and co-sponsors the contestant from Canada in the annual championship game. In the video below, Maplesoft's Tina George (introduced by AMS Vice President Ken Ono) congratulates contestants at the 2019 Championship in Baltimore.

The Pacific Institute for the Mathematical Sciences (PIMS) co-sponsors a contestant from Canada in the annual championship game at the Joint Mathematics Meetings. The institute represents mathematicians from Alberta, British Columbia, Washington (state), Saskatchewan, and Manitoba. The institute's mandate is to promote research in and applications of the mathematical sciences, to facilitate the training of highly qualified personnel, to enrich public awareness of and education in the mathematical sciences, and to create mathematical partnerships with similar organizations in other countries (with a particular focus on the Pacific Rim).

Texas Instruments donates a TI-Nspire graphing calculator, the TI-Nspire CX, to each winner of The Math Game.

Each third-place finisher in The Math Game receives a copy of Calculus with Early Transcendentals, written by Anton, Bivens, and Davis and donated by John Wiley & Sons. 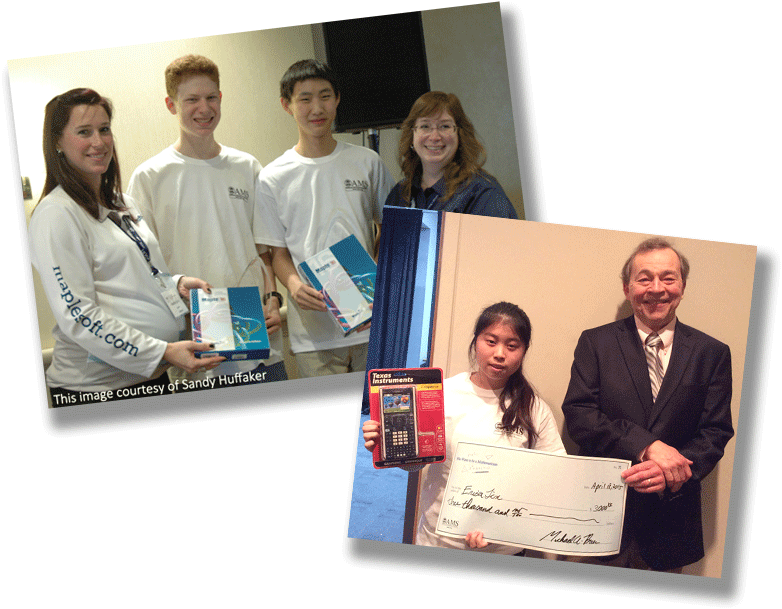