Who Wants to Be a Mathematician at the University of Nevada, Las Vegas

For the first time, Who Wants to Be a Mathematician employed a team format when it traveled to the University of Nevada, Las Vegas--the western site for the 33rd American Regions Mathematics League (ARML) competition--on May 30. Teams of high school students from the western part of the U.S., and from Taiwan, Hong Kong, and the Philippines participated in individual and team events as part of the nationwide ARML competition.

For Who Wants to Be a Mathematician, teams from game one were from Oregon, the San Francisco Bay area, Utah, and Washington. Teams for game two came from Colorado, the Desert Southwest, San Diego, and Southern California.

Both games were very close. In game one, the Washington and Oregon teams fought for first place with Washington winning based on a correct answer to question six. That correct answer was the only difference between the two teams' scores. In game two, the very exuberant Colorado team battled for first with the team from Southern California. Southern California had a wrong answer on question three, but also wound up winning because of question six, when it answered correctly but Colorado didn't. The margin of victory in both games was 300 points, out of a possible total of 5400.

Then two members from each of the winning teams competed in the Square-Off Round: One question to decide which team would advance to the Bonus Round. After the question--on probability--was revealed, Sam Keller of the Washington team signaled in first and knew the correct answer, which earned Washington a chance at the bonus question, worth $2000.

The four members of the Washington team, Sam, Justin Yan, Qiaochu Yuan, and Joy Zhang huddled for three minutes, discussing the bonus question, which was a challenging question about trigonometry. Unfortunately, they didn't get the correct answer, but they still won a total of $2000 from their game one win and Square-Off Round victory.

Below is a list of all prizes won by the teams, and the players on those teams (in each case below, each person listed won the indicated prize, that is, no one had to split calculators, software, or books into four pieces).

The AMS thanks sponsors Texas Instruments, Maplesoft, and John Wiley and Sons for their continued generous support of Who Wants to Be a Mathematician. In this case, the sponsors were very happy to provide four times as many prizes as usual. Thanks also to ARML officials Paul Dreyer, who made local arrangements for the game, and Bryan Sullivan, and to the coaches and teams who took time out from their busy schedule that weekend to practice for the game and play Who Wants to Be a Mathematician. It wasn't easy to learn the rules for the team game in such a short time, but all the players executed the game plan flawlessly. 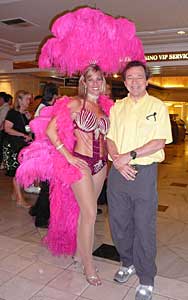 While in Las Vegas, Mike attended the Math Game Show Hosts convention
and learned what all the best-dressed emcees are wearing.