Kyle Gatesman, a senior at the Thomas Jefferson High School for Science and Technology in Virginia, won \$1,000 playing Who Wants to Be a Mathematician at the USA Science and Engineering Festival (USASEF) on April 6. Kyle qualified for five straight years at games that took place in Washington, DC: at the USASEF in even-numbered years and at the National Math Festival in odd-numbered years. Here are videos of the action, followed by a hip hop performance by Professor Lyrical from the University of the District of Columbia, and Kyle just after his victory.

Below are photos and a description of the game. First, Professor Lyrical with the six contestants. 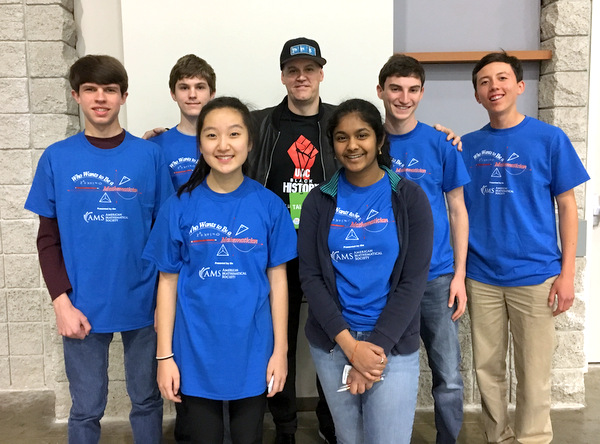 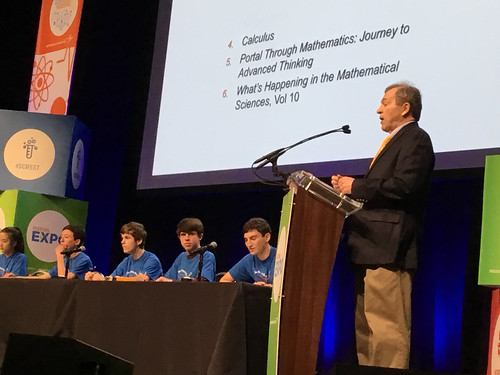 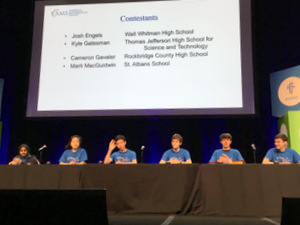 During the game, Kyle answered all the questions correctly to take first place. He and Josh were tied after question six, with Pravi--an eighth grader--in third place. Pravi answered the next two questions correctly to finish in second place, while Josh finished third. Kyle earned \$1,000, a TI-Nspire CX, and a chance at the \$2,000 Bonus Question. Unfortunately, Kyle did not answer the Bonus Question correctly, but he did have a successful afternoon (and career) playing Who Wants to Be a Mathematician. Below: Pravi and Kyle after the game with their uncashable checks. 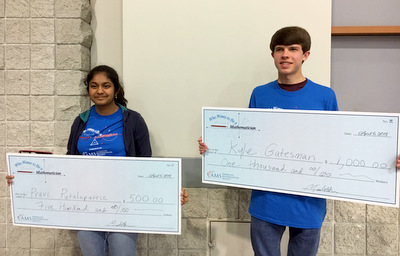 Note: Mark and Cameron tied for fifth and opted for the indicated prizes.

The students, teachers, and math fans who attended and enthusiastically cheered on the contestants and Professor Lyrical.

Bill Butterworth (Who Wants to Be a Mathematician co-creator and tech guru), DePaul University, who managed to get through convention security so he could run the game.

The AV crew, which provided sharp pictures and clear sound (which, unfortunately, didn't make it to our video).

Find out more about Who Wants to Be a Mathematician. See information about the AMS hands-on activity at the 2018 USASEF.