Who Wants to Be a Mathematician at Western Connecticut State University

Despite a longer-than-expected visit from winter the day before (also an uninvited one), 200 very enthusiastic people turned out for Who Wants to Be a Mathematician, part of the Math Fair at Western Connecticut State University (WCSU) on April 5. Steven Ma, a sophomore at nearby Greenwich High School, won $1,000 from the AMS and a TI-Nspire CX from Texas Instruments.

Along with Who Wants to Be a Mathematician, there were other math games, math research posters, two talks about applied math, and as much food as you could expect from a non-cruise-ship event. Here are some photos, all taken by Peggy Stewart, WCSU. 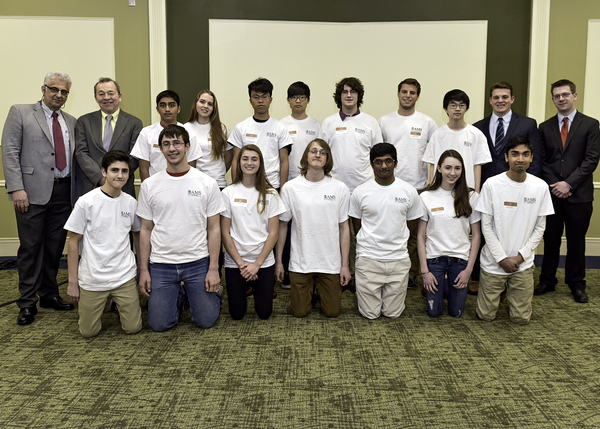 Videos from the games:

The audience was welcomed by The WCSU Maricostas School of Arts and Sciences Dean, Missy Alexander, and by the director of its Kathwari Honors Program, Christopher Kukk. Each pointed out some of the advantages of studying math in general and studying it at WCSU.

Pierce O'Donnell, a math graduate of WCSU, then talked about what it was like being an actuary. Although he started college as a history major, O'Donnell soon realized he had an affinity for math so he switched majors and is now an actuarial associate at Prudential. Following O'Donnell's presentation, a current WCSU math major, Alex Potocki, talked about research he has done with faculty member Stavros Christofi on price optimization in the soft drink industry. Anyone who got thirsty as a result of this talk soon got that thirst quenched during the refreshment break.

After the break, 14 local students participated in Who Wants to Be a Mathematician. In game one, Michael Kural answered every question correctly and won. Tanishq Kancharla stayed with Michael almost the whole way, but did not get the last question correct. Michael's victory earned him $500 and a TI-Nspire CX. There was a glitch in this game when the software used to keep track of points collided with the laptop's operating system, resulting in some hand calculations of the scores, but the audience and contestants were very patient and order was restored in time for game two. Steven Ma answered every question correctly in this game, which earned him the same cash and prizes as Michael and a spot in the Square-Off Round.

Steven answered quickly in this round to win another \$500 and a chance at the \$2,000 Bonus Question. Unfortunately, he did not get this question correct, but still had a successful day.

Here are all the prizes won that day along with photos of most of the winners. 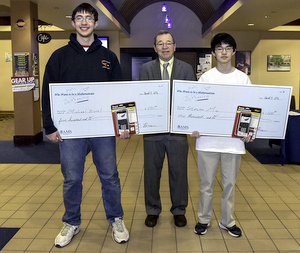 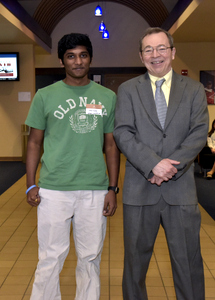 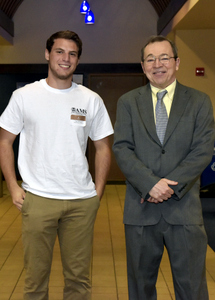 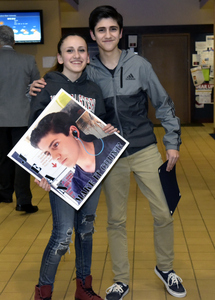 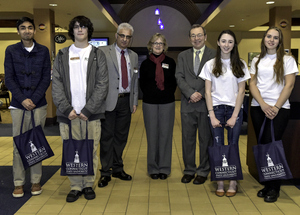 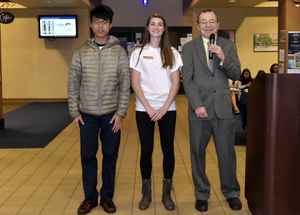 Thanks very much to our sponsors: Maplesoft, the Who Wants to Be a Mathematician Technology Sponsor; Art of Problem Solving, our Online Community Sponsor; Texas Instruments; John Wiley and Sons; and the local sponsors: Newtown Savings Bank, the WCSU chapter of Sigma Xi, and the Maricostas School of Arts and Sciences. Thanks also to Stavros Christofi and the Mathematics Department Planning Committee who arranged all the events that day. And thanks to the teachers and students for braving the elements and making it such an exciting event.