Who Wants to Be a Mathematician at the University of Hawai'i

"I am sure I can speak for everyone involved when I say that this was the best math competition we have ever been a part of. Many thanks to all of you for that wonderful happening."

"Thank YOU and the AMS for such a delightful and invigorating morning. The student cheering section also had a great time. They are still talking about the intensity and excitement that Ken Ono shared about the mock-theta functions. While they knew that most of the mathematics was well beyond them (at this point in time), they enjoyed the historical connections and were thrilled when they recognized some of the symbols." 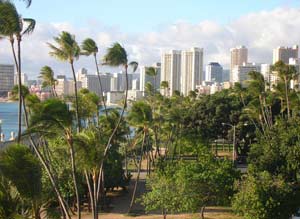 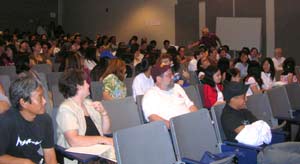 Freeman Dyson's Challenge for the Future: The story of Ramanujan's mock theta functions, by Ken Ono

Ken, at work, and at play

Ono gave the audience a glimpse into the remarkable life of the remarkable mathematician Srinivasa Ramanujan (1887-1920). Mock theta functions were introduced by Ramanujan right before his death. Ono described how subsequent investigations of the functions by other mathematicians have led to significant mathematics. There will be a movie about Ramanujan, who was largely untrained in formal mathematics and in fact flunked out of college twice, which will be made in India. Also there will be an article about mock theta functions in an upcoming Proceedings of the National Academy of Sciences, co-authored by Ono.

After the talk, the Oahu contestants played two games of Who Wants to Be a Mathematician.

Roydan Ongie won the first game, answering all eight questions correctly, which put him in the bonus round.

The second game was a battle between Philip Mocz and Elvine Pineda. There were several lead changes in the game, with Elvine winning by getting the final question, which involved algegra and geometry, correct.

Both Elvine and Roydan came close to the right answer on the $2000 bonus question, but unfortunately neither contestant got the question right. They each won a TI-89 Titanium graphing calculator, however, so all was not lost. 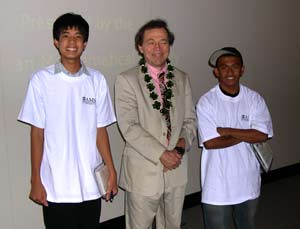 The AMS thanks Tom Hoover of the University's Mathematics Department who made all the local arrangements for the game; the National Science Foundation for the Distinguished Teaching Scholar's Grant held by Ken Ono which provided travel and lodging for this outreach event; sponsors Texas Instruments, Maplesoft, and John Wiley and Sons for their support of Who Wants to Be a Mathematician; and the Oahu teachers and students from the participating schools who took time out from a Saturday morning to be at the game. Mahalo! 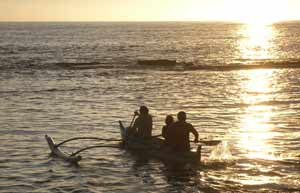 The WWTBAM crew saves on transportation costs and heads for home 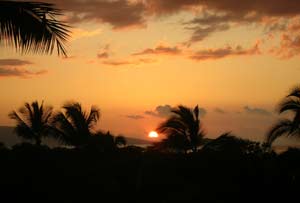 Photographs by Who Wants to Be a Mathematician judge and co-creator Bill Butterworth of the DePaul University Department of Mathematical Sciences, by Notices of the AMS managing editor Sandy Frost, and by AMS Public Awareness Officer Mike Breen (emcee).