Who Wants to Be a Mathematician at the University of Iowa 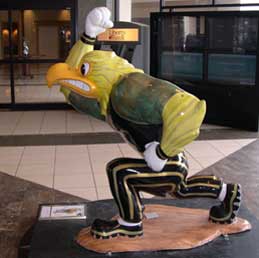 Miller Li of West High School and Peter Montag of Regina High School (pictured below with game host Mike Breen) each won $1500 when Who Wants to Be a Mathematician was held at the University of Iowa on March 25. 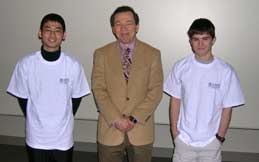 The pair's winnings capped a morning of mathematics that began with a talk by Ken Ono, Solle P. and Margaret Manasse Professor of Letters and Science in the Department of Mathematics at the University of Wisconsin-Madison (he is at right, shooting the mathematical breeze with Who Wants to Be a Mathematician judge Bill Butterworth). 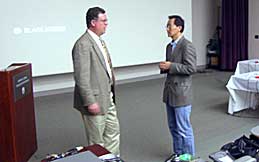 Ono introduced his topic by listing some ways that people can win one million dollars: Winning the Publishers Clearinghouse sweepstakes, getting on and winning the television game show Who Wants to Be a Millionaire, eating earthworms and surviving on the television show Survivor, and solving one of the Clay Institute's Millennium Prize Problems. The particular problem that Ono talked about was the Birch and Swinnerton-Dyer Conjecture.

Ono gave the official statement of the problem, which didn't mean much to the audience since almost all were not number theorists. The goal of his lecture was to explain what the conjecture was and why anyone would care. Given a fairly simple-looking equation, such as x2 - 2y2 = 1, one might ask how many integer values for x and y make the equation true. It turns out that there are infinitely many pairs of integer solutions and Ono showed algebraic and geometric ways to obtain them. Yet the equation x2 - 4y2 = 1 has only a finite number of integer solutions. How can one know in advance the number of solutions to such equations? The Birch and Swinnerton-Dyer Conjecture relates to this question.

Elliptic equations, ones of the form y2 = x3 + Ax + B, which are used to encrypt information for e-mail and Internet communication were the subject of the remainder of the talk. Ono asked how to tell the number of rational-number solutions to particular elliptic equations and when an equation does have an infinite number of solutions, how to find a set of points or values that generate all solutions. The Birch and Swinnerton-Dyer Conjecture would allow people to make such conclusions about elliptic equations and curves - it relates the number of generators to a certain class of functions.

This and other Millennium Problems are difficult - Ono called them Holy Grails of mathematics - and progress on them is more likely to be incremental, so that it may be a long time before anyone claims this prize. Yet Ono pointed out that there are many other prizes and awards in mathematics which are reachable.

After Ken's talk and some serious snacks provided by the University of Iowa Department of Mathematics, the students listed and pictured below played Who Wants to Be a Mathematician. 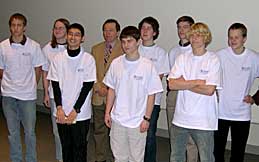 Contestants (left to right in the picture):

In game one, Peter Montag got every question right without using his "Help" and qualified to play in the bonus round.

Game two was a see-saw battle - with 600 points separating the top three contestants - which Miller Li won by getting the last question correct.

Peter and Miller each had a chance to win $1500 by answering the bonus "1.5 Grand Prize Question" correctly. They did much contemplating and calculating during the allotted three-minute time period. 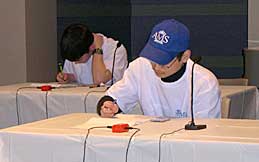 When time elapsed, the audience was polled about its preference among the four choices. The audience had a clear favorite - as it did when polled at other times during the games - which turned out to be the same choice that both contestants had chosen (although, when asked, Miller wasn't quite sure which one he had picked, but fortunately answers are recorded electronically). Peter, Miller, and the audience were all correct, so the game ended with quite a flourish as the two students each won the $1500 cash prize donated by the AMS.

$1500 from the AMS and Maple 10 from Maplesoft: Peter Montag and Miller Li;

Calculus by Anton, Bivens and Davis, from John Wiley and Sons: Leif Gaebler and Edward Talmage;

What's Happening in the Mathematical Sciences, from the AMS: Nick Brady and Evan Waddell.

Thanks to the University of Iowa Department of Mathematics chair Dave Manderscheid, faculty member Oguz Durumeric, and his son Zakir for their help arranging and staging the game. Thanks also to Maplesoft, Texas Instruments, and John Wiley and Sons for their continued support of the game. The AMS congratulates all the contestants who qualified and thanks their teachers for participating. The event was partially supported by the National Science Foundation.