Who Wants To Be A Mathematician in Madison, Wisconsin

On Friday, April 16, the mathematics department at Madison Area Technical College-Truax in Madison,Wisconsin hosted the AMS game Who Wants To Be A Mathematician. There were four grand prize winners who won a total of $6000 in cash as well as prizes.

The game followed a talk by Ken Ono, S.P. and Margaret Manasse Professor of Letters and Science. Ono of the University of Wisconsin, Madison Department of Mathematics spoke for about forty-five minutes about Number Theory and Partitions: The Legacy of Euler, Ramanujan, and Dyson, and Beyond. During the talk, Ono described some of the history of and theory behind partitions; pointing out how easy-to-state problems can be difficult to solve. In reference to the AMS game and the television show from which it is derived, Ono also alluded to the Millenium Problems and how solving any one will make the solver a millionaire.

Ono asked several questions of the audience during his talk, keeping the students engaged throughout. During the question-and-answer session Ono revealed that his favorite mathematical accomplishments were his graduate students.

After a short break, ten Wisconsin high school students participated in Who Wants To Be A Mathematician. 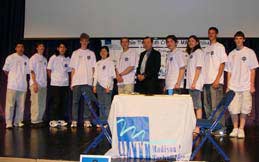 The first two students to compete, Erik Saunders and Alec Li (pictured below), both answered all 15 questions correctly and each won $2000. Erik used two lifelines on his Grand Prize question, although he appeared sure of his answer even without help. The front page of the April 17 edition of the Wisconsin State Journal had a good picture of Erik's reaction when he won. Equally happy with his big win was Alec Li, who had used all his lifelines by the time he got to his final question. Alec was stumped for a long time, but as time was about to expire he appeared to have a sudden insight into the problem and answered the question confidently and correctly.

The other eight contestants played a shorter round in the time remaining. Two of those contestants, Po-Ling Loh and Andrew Isihara (pictured below), answered all questions in the shorter round and won $1000 each. Both Po-Ling and Andrew impressed the crowd with the speed with which they answered very difficult questions. In fact, all the Grand Prize winners delighted the audience with their explanations of how they solved their final questions. In addition to the cash, they each won copies of Maple 9.5 from Maplesoft, and from John Wiley and Sons, Anton's Calculus and one-year access to their Machina website. Erik and Alec also won TI-89 Titanium graphing calculators fromTexas Instruments.

All contestants won prizes that day. Many were donated by the AMS and the Mathematical Association of America.

Following the game, the audience and contestants were treated to lunch and jazz music, both of which were arranged by Jeganathan Sriskandarajah, of the MATC-Truax mathematics department, who was the organizer for the day's events. He has posted more information about the day's events and several pictures.