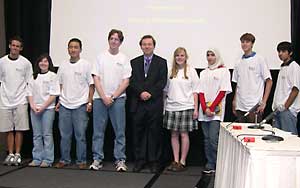 "I have been meaning to contact you to let you know how great we all thought the competition was. Thank you for having it."

"The students had a great time at the game as well as in the sessions they went to. Thanks for all your work in making it so successful."

"This whole experience reminded me of contests I took as a high schooler, and how much it boosted my confidence and opened doors for me. I'm a second-year teacher, often wondering whether my career change (from mechanical engineering) was a smart move. Events like this certainly help make me want to stay in the profession."

Below are the eight contestants (pictured near the top of the page, listed left to right) and game emcee Mike Breen.

This was the first time that both game winners were female. 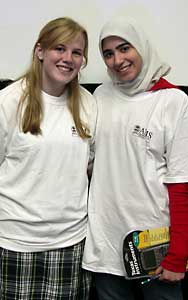 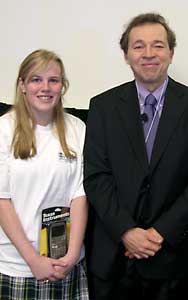 Here are the prizes won by the contestants.

Thanks to game sponsors Texas Instruments, Maplesoft, and John Wiley and Sons for their prizes and support of the game. Thanks also to the New Orleans area teachers for participating in the qualifying process and the game. 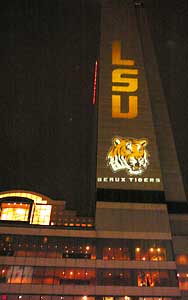 The Sheraton New Orleans welcomes mathematicians with its tribute
to the LU-decomposition but, unfortunately, no one ran the display through spell check.

Photographs by Wayne Catalano, by Who Wants to Be a Mathematician judge and co-creator Bill Butterworth of the DePaul University Department of Mathematical Sciences, and by AMS Public Awareness Officer Mike Breen (emcee).

See other highlights of the 2007 Joint Mathematics Meetings.