Here's Gabriel talking about his victory:

Find out more about Gabriel in "Dorfsman-Hopkins Is Dartmouth's Prize-Winning Math Wizard," published in Dartmouth Now.

The six undergraduate contestants who played that day are pictured below (and identified under the picture): 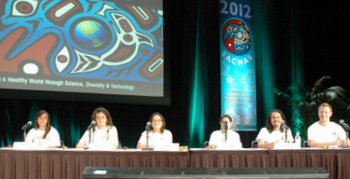 Here's a brief summary. The game was close the whole way, providing early-morning drama for the attendees who managed to wake up for the 7:30 breakfast. Jessica had an early lead and held on to first through the sixth question. Claire and Gabriel were the only two contestants to answer question seven correctly, so they moved into first with two questions to go. All the contestants answered the eighth question correctly, and going into the last question--worth 900 points--only 800 points separated the six contestants.

The AMS thanks sponsors Texas Instruments, Maplesoft, and John Wiley and Sons for supporting Who Wants to Be a Mathematician. We'd also like to thank Ivelisse Rubio (University of Puerto Rico-Rio Piedras), Ricardo Cortez (Tulane University), and Jenny Kurzweil (SACNAS) for their help arranging the event. 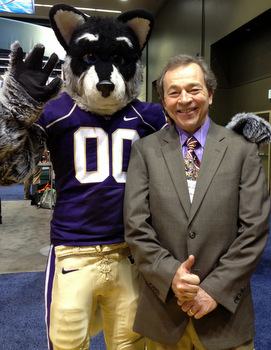 No idea if that was Courteney Cox inside the costume,
but as far as the University of Washington is concerned, Seattle is Cougar Town.