Friday the 13th turned out to be a lucky day for seven Texas high school students when they played two games of Who Wants to Be a Mathematician at the Joint Mathematics Meetings in San Antonio. The students, pictured below with game emcee Mike Breen, won a total of $5000 from the AMS as well as a TI-89 Titanium graphing calculator from Texas Instruments, Maple 10 software from Maplesoft, the text Calculus by Anton, Bivens and Davis from John Wiley and Sons, and the series What's Happening in the Mathematical Sciences from the AMS. 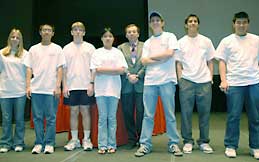 Four students from San Antonio competed in the first game. Those students and their prizes are:

Susan finished in first place which earned her a chance at the 1.5 Grand Prize Question and a slot in the second game featuring winners of previous Who Wants to Be a Mathematician games.

The answer to the question depended on two components. Susan analyzed what many thought to be the harder component very easily, but was a little unsure about the other component. After some time had elapsed, she changed her initial response and stayed with that decision. Trusting her second instinct proved to be good strategy - she was correct and won the $1500! Her explanation was very sound and impressed the audience of mathematicians.

In the championship game Susan played against three students from the Houston area who had won Who Wants to Be a Mathematician games at Sam Houston State University in October: 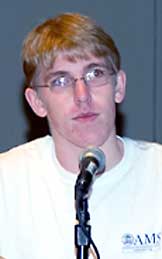 It was a tough question involving a sequence and trigonometry, which unfortunately David missed. He did collect the top prize in the game, however. Here are the cash amounts, from the AMS, won in the championship game: 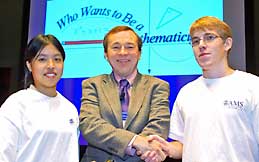 The AMS congratulates all the contestants who qualified to play in the games and the teachers who made the extra effort so that their students could participate, and thanks sponsors Texas Instruments, Maplesoft, and John Wiley and Sons for their support of the game.