"Thanks for inviting us to participate. The excitement around campus was tremendous after we returned to school. I hope that you come back and offer us another opportunity to compete in the future."

"That was really a lot of fun ... Thank you for all your work and time and effort that went into putting on this event. I think it went very smoothly, and was enjoyed by all."

On October 11, eight students from four New Mexico schools played Who Wants to Be a Mathematician at the University of New Mexico. The game coincided with the Albuquerque International Balloon Fiesta, the Tenth New Mexico Analysis Seminar, and preceded the AMS Fall Western Sectional meeting, the latter two events hosted by the University's Department of Mathematics and Statistics. The morning of the game, Michael Nakamaye, Undergraduate Chair of the Department, gave an entertaining talk to the Who Wants to Be a Mathematician audience entitled "Mathematics: Learning How to Think and Communicate Clearly." 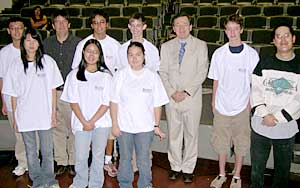 Mathematics: Learning How to Think and Communicate Clearly - Michael Nakamaye

Nakamaye related his experiences with mathematics from when he was about four until the present, so that the students in the audience would know what to expect should they become mathematicians. He also gave reasons why he would encourage people to study mathematics.

Not much of Nakamaye's education was traditional. For example, after taking geometry in high school - when many students would take another algebra course or a combination of algebra and trigonometry - Nakamaye spent a few weeks in a precalculus course, but wasn't learning anything new and so was allowed to enroll in calculus. Calculus was great "for a few weeks," but he yearned for something more challenging. This challenge came when his family moved to Germany and Nakamaye studied Eric Temple Bell's Men of Mathematics, proving a result that Bell said fewer than 10 people in a million could prove.

Nakamaye did not finish high school, but instead went to Gonzaga College, where his father taught. At Gonzaga, he ran out of math courses to take in two years. In his junior year he studied French literature abroad. This experience was so satisfying that he advised students "to leap at the opportunity" to study abroad. In his senior year at Gonzaga and in graduate school at Yale University, Nakamaye didn't take classes but studied mostly on his own.

At his first faculty position, at Harvard University, Nakamaye was very impressed with the intelligence and the enthusiasm of the students. In his fifth year at Harvard he became very sick, which forced him to think about what was really important to him. As a result, he decided to dedicate himself to teaching. Since joining the faculty at the University of New Mexico, he has become involved in math education. He thanked colleagues Kristin Umland and Adriana (Rocio) Aceves for their help in giving him different ways to help motivate students.

Nakamaye's advice to students is to pursue what they enjoy, try lots of different things, and use their college education to learn about themselves.

The AMS thanks Alejandro Aceves, Chair of the University's Department of Mathematics and Statistics, and Department Administrative Assistant Claudia Gans, who made the local arrangements for the game; and sponsors Texas Instruments, Maplesoft, and John Wiley and Sons for their continued generous support of Who Wants to Be a Mathematician. 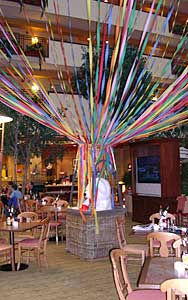 The Who Wants to Be a Mathematician crew, seeking to minimize its carbon footprint on the trip home and save on parking,
learns never to trust a stuffed bear's GPS.

Photographs by Who Wants to Be a Mathematician judge and co-creator Bill Butterworth of the DePaul University Department of Mathematical Sciences and by Sandy Frost, Managing Editor of Notices of the AMS.

Find out more about Who Wants to Be aMathematician.