Who Wants to Be a Mathematician at the University of Wyoming

"I had very high expectations for the game and it turned out to be even more fun and interesting than I had anticipated. It was just awesome!" 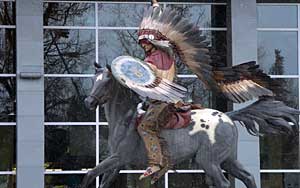 Chief Washakie
"I fought to keep our land, our water, and our hunting grounds - today education is the weapon my people will need to protect them."

Neither snow, nor hail, nor thunder and lightning deterred eight students from playing Who Wants to Be a Mathematician at the University of Wyoming on March 29 in Laramie. Weather had been delightful a few days before the game, but a blizzard hit that day, closing all roads into Laramie. The students who played were those who were in town when the blizzard hit. 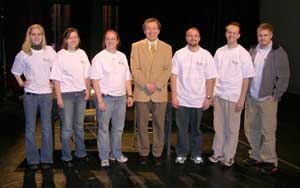 Pictured above, left to right:

(Not pictured: Erin Lockwood and Bob Weatherford, both of Laramie High School) 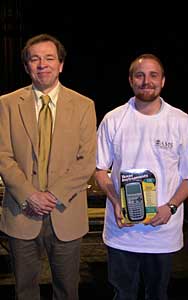 Immediately after the game, the University was forced to close because of the weather.

The AMS thanks Bryan Shader and Siguna Mueller of the University's Department of Mathematics who made all the local arrangements for the game and had nice gifts for the participants; the National Science Foundation for the Distinguished Teaching Scholar's Grant held by Ken Ono which provided travel for this outreach event; and sponsors Texas Instruments, Maplesoft, and John Wiley and Sons for their support of Who Wants to Be a Mathematician.

Pedestrian (before the blizzard) faced with the realization
that even those who know history are condemned to repeat it.

Photographs by Who Wants to Be a Mathematician judge and co-creator Bill Butterworth of the DePaul University Department of Mathematical Sciences, and AMS Public Awareness Officer Mike Breen (emcee).