The 2020 Who Wants to Be a Mathematician Championship

Luke Robitaille, a sophomore at Robitaille Homeschool and the 2019 champion, won \$10,000 and a TI-Nspire CX in the 2020 Who Wants to Be a Mathematician Championship at the Joint Mathematics Meetings in Denver on Jan. 18. Luke went up against Austen Mazenko in the finals that day after competing in the semifinals with 11 other contestants from the US, UK, and Canada (seven in the first semi, six in the second). Austen's runner-up finish earned him \$6,000 and a TI-Nspire CX.

Here's Luke just after his victory.

Below are a slideshow of photos from the games; a description of the semifinals and finals; video of all the games; and videos from the awards luncheon hosted by Francis Su (Harvey Mudd College) and attended by AMS President Jill Pipher, Amanda Folsom (Amherst College), Bjorn Poonen (MIT), sponsors, contestants and parents. 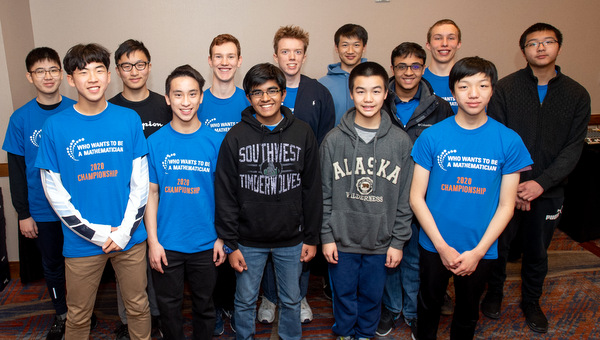 Find out more about the contestants. 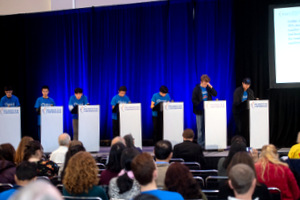 At the halfway point of the first semifinal, Jae, Ben, Andrew, and Luke were tied for first (all had answered the first four questions correctly). The four-way tie continued after question five, but then Luke and Andrew Lee pulled ahead by continuing their correct-answer streak on questions six and seven. So it all came down to the last question, which Luke answered correctly, but Andrew didn't, which earned Luke \$2,000 from the AMS, a TI-Nspire from Texas Instruments, and a spot in the finals. Timothy finished in second place, Andrew was third, and Alex was fourth. 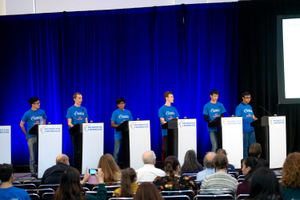 All six contestants in this game answered the first three questions correctly, but Andrew Cai, Thomas, and Chinmay were the only three contestants to get question four right, so they were tied for first place at the halfway point of the second semifinal. That tie continued through question five, but Thomas moved ahead of Andrew and Chinmay by getting number six correct. Austen also answered that question correctly and when he got question seven right, he moved into first place and stayed there after the last question, which all six contestants answered correctly. Three hundred points separated the top four contestants in this semifinal, as Andrew and Chinmay tied for second, 200 points behind Austen, and Thomas finished in fourth, 100 points behind them. So Austen got a place in the finals, along with the same cash prize and TI graphing calculator that Luke won in the first game. 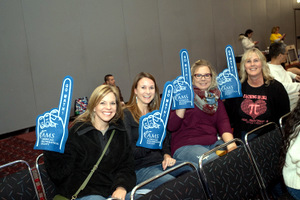 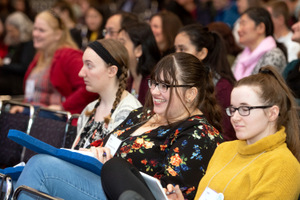 Austen didn't get much of a chance to rest, though, as he was also a winner in the 2020 AMS Math Poetry Contest. He recited his poem, as did the other winners, between the second semifinal and the finals. 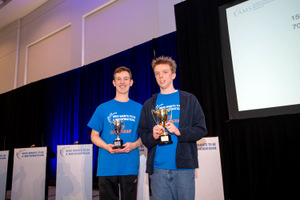 In the semifinals, any number of contestants can earn points by answering correctly. In the finals, however, only the first person to answer correctly gets points. Luke was first to answer six of the eight questions correctly, which made him the 2020 champion. So he won the \$10,000 first prize (total) and Austen won \$6,000 as the runner-up.

The cash and prizes won by all the contestants are listed below.

Video of the webcast:

The second semifinal starts at about 39:00, the poetry readings at about 1:07:00, and the finals at about 1:12:00. A video playlist, one video for each question, is below the webcast video.

Playlist of questions from the semifinals and finals:

Videos from the awards luncheon:

AMS President Jill Pipher on the many aspects of mathematics:

Paulina Chin, Maplesoft, on her company's support of the game:

For each cash prize, a matching amount goes to the student's math department, or, if the student is homeschooled, to a homeschool association or math circle of his or her choice.

Note: Jae and Ben tied in the first semifinal. Andrew Cai and Chinmay tied in the second. Thanks to Maplesoft for awarding both contestants their Maple 2019 software.

Math departments get their cash prizes: 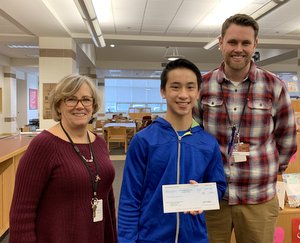 Our sponsors: DigitalEd, the Who Wants to Be a Mathematician Technology Sponsor; Art of Problem Solving, the Online Community Sponsor; Maplesoft, the Good Thinking Society, Wolfram Research,the Pacific Institute for the Mathematical Sciences, Texas Instruments, and John Wiley and Sons.

Bill Butterworth (Who Wants to Be a Mathematician co-creator, judge, and tech guru), DePaul University.