Home > About the AMS > Society Governance 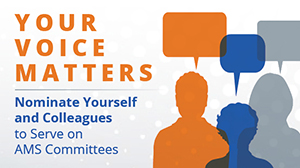 The American Mathematical Society has a bicameral governance structure consisting of the Council (created when the Society’s constitution was ratified in December 1889) and the Board of Trustees (created when the Society was incorporated in May 1923). These bodies have the ultimate responsibility and authority for representing the AMS membership and the broader mathematical community, determining how the AMS can best serve their collective needs, and formulating and approving policies to address these needs. The governing bodies determine what the Society does and the general framework for how it utilizes its volunteer, staff, and financial resources.

The Governance Leadership consists of the Officers (President, President Elect or Immediate Past President, three Vice Presidents, Secretary, four Associate Secretaries, Treasurer, and Associate Treasurer), the Council, Executive Committee of the Council, and Board of Trustees.

The Council formulates and administers the scientific policies of the Society and acts in an advisory capacity to the Board of Trustees. Council Meetings are held twice a year (January and the spring).

The Board of Trustees receives and administers the funds of the Society, has full legal control of its investments and properties, and conducts all business affairs of the Society. The Trustees meet jointly with the Executive Committee of the Council twice a year (May and November) at ECBT Meetings.

The Council and Board of Trustees are advised by nearly 100 Committees, including six Policy Committees (Education; Equity, Diversity, and Inclusion; Meetings and Conferences; Profession; Publications; and Science Policy) and over 20 Editorial Committees for the various Journals and Books it publishes.

The Council and Board of Trustees are also advised by the Executive Director and the Executive Staff, who are responsible for seeing that governance decisions are implemented by the Society's 210 staff members.

Please explore and get involved.

For further information about Society Governance, please see the links to the left or Contact the AMS Secretary.

Notices of the AMS