"Just wanted to tell you how much we've appreciated the entire [Who Wants to Be a Mathematician] contest with actual attendance at the JMM the cherry on top. It was gratifying to watch my class have such perfect behavior when attending talks and then really exciting to listen to the conversations they were having on the drive back."

"Thanks so much for what proved to be a very exciting competition. We all had fun watching the webcast and cheering on Sam."

"Thank you very much for organizing Who Wants to Be a Mathematician. I had a lot of fun meeting great mathematicians at the luncheon, listening to some of the talks at the JMM in San Antonio, and talking to other contestants."

Sam Korsky, a senior from Glenbrook North High School in Illinois, won the 2015 national Who Wants to Be a Mathematician on January 12 at the 2015 Joint Mathematics Meetings, taking home US$5,000 and a TI-Nspire CX for himself, and $5,000 for the Glenbrook math department. Sam edged out Shyam Narayanan on the last question of the finals to win. Shyam, the 2012 champ and four-time qualifier, won the TI-Nspire CX, $3,000 for himself, and $3,000 for the math department at his school, Blue Valley West High School in Kansas. Here's Sam just after his victory:

Sam and Shyam competed in the finals along with Michael An of the North Carolina School of Science and Mathematics. Michael won Maple 18, provided by Maplesoft, the game's technology sponsor, along with $1,000 for himself and the same amount for the school's math department.

Here are videos from the games:

Below is a slideshow of the games and the awards ceremony afterwards. 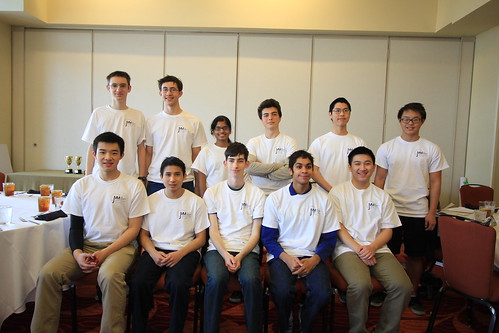 (Most of the above photos are by Laurie Shaw of Goen South. The rest are by AMS Public Awareness Officer Annette Emerson.)

The contestants, pictured and identified below, qualified for the game by taking two rounds of qualifying tests. Most took the online version, which was administered by Maplesoft using Maple TA. In San Antonio, the contestants were split into two groups for the semifinals, competing to make it to the finals and have a chance at the $10,000 grand prize. 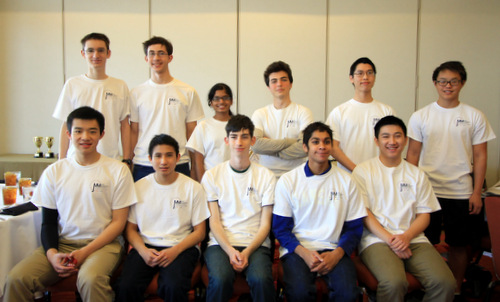 Find out more about the 2015 contestants. 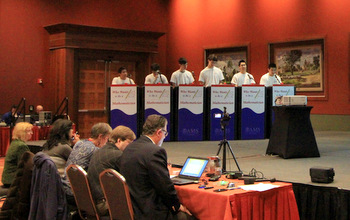 Michael Kural answered the first six questions correctly and was the only person to get question four right, a question about the Moore method. Michael knew that answer because he had taken a topology course that was taught using the Moore method. For the last two questions of the game, Michael An, Sam, and David answered both correctly, which put them in a three-way tie for first. Only two could qualify for the finals, though, so two tie-breaking questions were used. Sam and Michael An won the tie-breakers, which earned them their spots in the finals. (Photo: Goen South.) 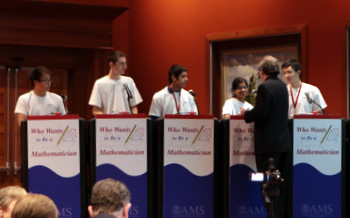 Although this semifinal did not end up in a tie, it was very exciting, with Jesse and Shyam taking turns being in first place. Shyam answered question seven correctly, which put him in first going into the last question--a question involving numbers. The two contestants from Texas, Shreya and John, were the only two to get it right, which put John in second, just behind Shyam. So Shyam moved on to the finals, for the third time in his high school career. He won as a freshman in 2012. Only 800 points separated the five contestants at the end of this game. (Photo: Goen South.) 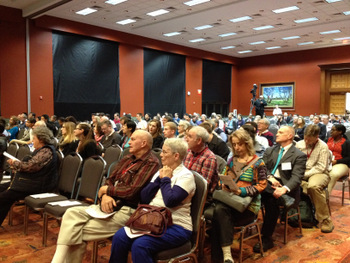 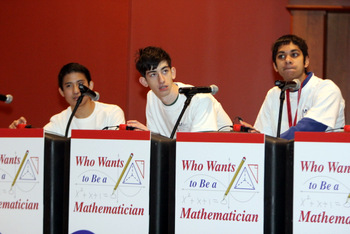 This was also a back-and-forth match, with each of the three contestants holding the lead at some point. Going into the last question, Shyam was in first, followed by Sam and Michael. Sam was the first to answer the last question correctly (in the finals, only the first person to answer a question correctly receives points for the question), which gave him the victory. Shyam finished second and Michael third. (Photo: Goen South.) 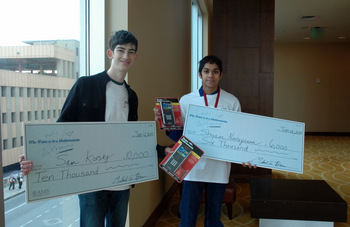 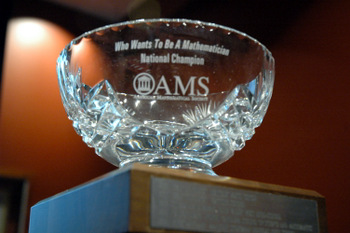 Here are all the prizes and cash won by the contestants in the 2015 national Who Wants to Be a Mathematician. For each cash prize, a matching amount is awarded to the math department of the student's school.

KSAT, the ABC affiliate in San Antonio, covered the game, as did The Northbrook Tower (the hard copy article was longer). In addtion, both Shyam and Shreya were written about in India West. 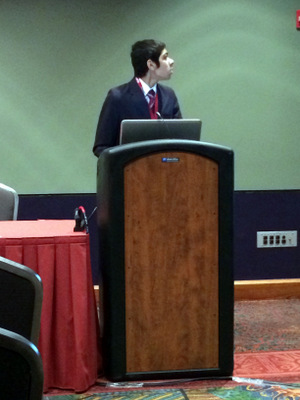 The next day, Shyam (at left looking at one of his slides during the question-and-answer period) gave a talk, Improving the Speed and Accuracy of the Miller-Rabin Primality Test, during the MAA General Contributed Paper session, Research in Number Theory. The talk resulted from research he did at the MIT PRIMES-USA program. Congratulations, Shyam. 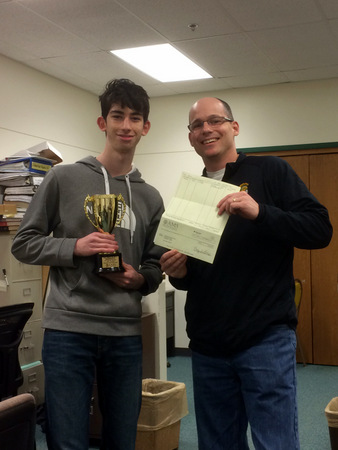 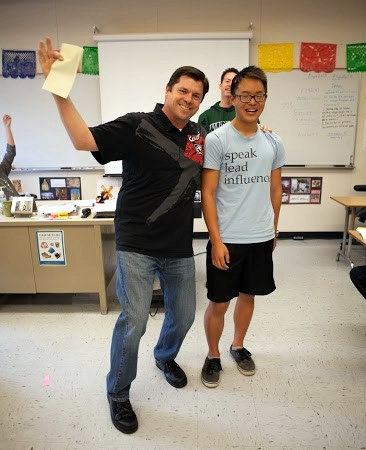 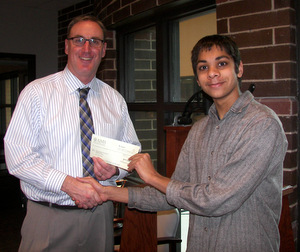 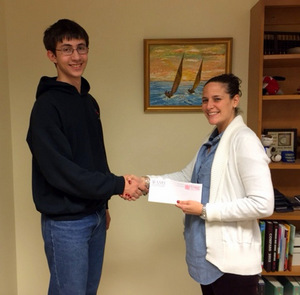 Thanks very much to our sponsors: Maplesoft, the Who Wants to Be a Mathematician technology sponsor, Texas Instruments, and John Wiley and Sons. Thanks also to our judges: Bill Butterworth (also Who Wants to Be a Mathematician co-creator), DePaul University, Caren Diefenderfer, Hollins University, Ivelisse Rubio, University of Puerto Rico-Rio Piedras; and to our performers: Tim Chartier (live), Davidson College and Frances Su, Harvey Mudd College. Also thanks to Albert Lewis of the Educational Advancement Foundation who allowed us to use excerpts of Master of the Game: The Story of R.L. Moore, a George Csicsery film about R.L. Moore. Thanks as well to Thomas Dick, Oregon State University, Bernard Madison, University of Arkansas, Harold Reiter, University of North Carolina Charlotte and Carl Yerger, Davidson College, for writing questions for the games, and to AMS staffers Robin Marek, Nancy Hoffman, and Samantha Faria, for helping set up that day.

Find out more about this year's contestants, Who Wants to Be a Mathematician.