Statement from the Task Force: March 2021 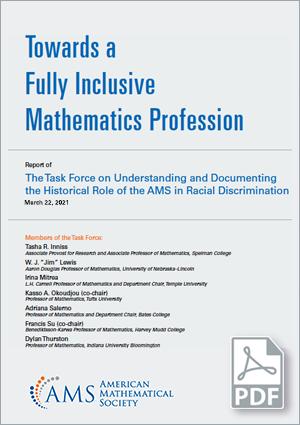 The Task Force on Understanding and Documenting the Historical Role of the AMS in Racial Discrimination has completed its work and has submitted its final report to AMS governance. We will continue to communicate about actions that emerge from the recommendations in this report. Meanwhile, you may read the report here. Task Force members thank the mathematicians who graciously shared their time through interviews, gave us feedback through this webpage, or directly reached out to us.

The AMS wants to hear your thoughts and ideas related to this report and our steps moving forward. Thank you! Comments are sent to AMS leadership

As part of the AMS participating in #ShutDownSTEM in June 2020, the governance established a task force of dedicated and diverse mathematicians to identify, engage and address issues past and present related to equality, racial justice and inclusivity.

In March 2021, the task force submitted a final draft of its report to AMS governance. That report details the historical role of the AMS in racial discrimination; and recommends actions for the AMS to take to rectify systemic inequities in the mathematics community.