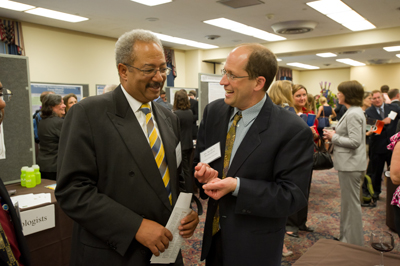 The AMS was represented at the Coalition for National Science Funding (CNSF) Exhibition on Capitol Hill on May 11, 2011 by Keith Promislow of Michigan State University. Professor Promislow presented his work on energy conversion to over 280 attendees at this annual event showcasing research and education projects supported by the National Science Foundation. 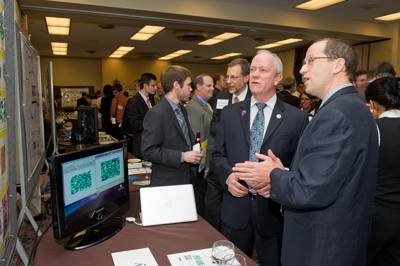 Promislow's exhibit, entitled "Efficient Energy Converstion: Mathematics of Nanoscale Networks," provided information on the need to capture energy from the environment, convert it to concentrated forms, and store it for later use. He explained that a key ingredient of the devices that store this energy is the "membrane separator," which permits ions of one charge to cross, but not ions of the opposite charge. He explained that efficient energy conversion requires good membrane separators. Promislow's research has developed a model that has the possibility to revolutionize the design of membrane separators, with significant ramifications towards the design of more efficient energy conversion and storage devices.

CNSF is an alliance of over 130 scientific and professional societies and universities united by a concern for the future viability of the national science, mathematics and engineering enterprise.