The AMS sponsored an exhibit at the 24th annual Coalition for National Science Funding (CNSF) Exhibition & Reception on Capitol Hill held on May 9, 2018.  Professor Talea L. Mayo, University of Central Florida, presented "Beyond Coursework: Extending a Successful Model for Building Diversity in STEM to University Campuses."

Mayo, a computational and applied mathematician, uses modeling and simulation to study hurricane storm surges and flood risk analysis. As an undergraduate student, she participated in the Significant Opportunities in Atmospheric Research and Science (SOARS) program, an undergraduate-to-graduate bridge program hosted at the National Center for Atmospheric Research (NCAR) in Boulder, Colorado. The program is designed to broaden participation in the atmospheric and related sciences. 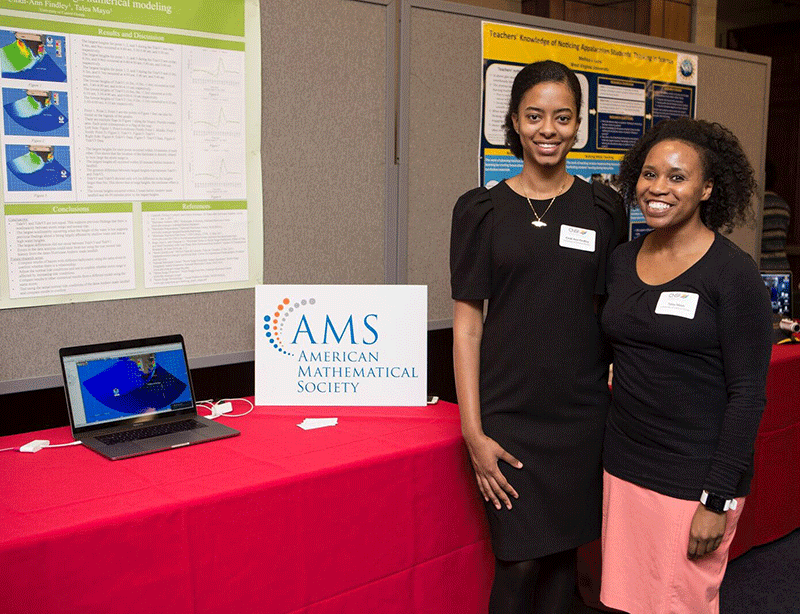 The SOARS program has recently been expanded to two college campuses, including the University of Central Florida, where Mayo is now a faculty member in the Department of Civil, Environmental, and Construction Engineering. She supervises the research of undergraduate student Cindi-Ann Findley, and together they study tides and hurricane storm surges in order to improve the understanding of coastal flooding and better serve coastal communities.

The Coalition for National Science Funding (CNSF) is an alliance of over 140 organizations united by a concern for the future vitality of the national science, mathematics, and engineering enterprise. The CNSF Exhibition is a well-attended annual event that features thirty-five exhibits where researchers present their work and explain the critical importance of increased, sustained federal investments in basic scientific research.

Learn more about the 2018 CNSF Exhibition