James A. Yorke, Distinguished University Professor of Mathematics and Physics at the University of Maryland presented "Chaos and Avalanches in Science and Socio-Political Systems" at an AMS sponsored Congressional briefing on December 4, 2012 in Washington, DC.

Professor Yorke talked about the science of chaos and how it has completely changed the understanding of physical processes in the last 30 years. From astronomy to weather prediction, chaos has become a way to understand physical systems. Avalanches are a particularly sudden type of chaos. This presentation demonstrated how political upheavals have much in common with avalanches and earthquakes. 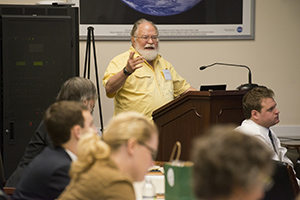 The AMS holds annual congressional briefings as a means to communicate information to policymakers.  Speakers discuss the importance of mathematics research and present their work in layman's terms to Congressional staff as a way to inform Members of Congress of how mathematics impacts today's important issues.