In the iconic “Spoonful of Sugar,” by the Sherman brothers, Mary Poppins invites the Banks children to overcome the daunting task of cleaning their room by finding the fun within. Robert Sherman got the idea for the song when informed by his son that he had swallowed the newly developed polio vaccine on top of a cube of sugar. We might wish that such a tactic could help overcome the vaccine hesitancy of our times. Regardless, the song continues to appeal to our human desire for play as one means of addressing the diffulty and drudgery of our days.

Francis Su has identified play as one of the fundamental human desires that reveal our mathematical natures and that help build virtues that lead to human flourishing 2. Virtues that Su identifies as awakened by play include hopefulness, confidence in struggle, patience, and perseverance. Each of these has been made more vital for human flourishing due to the challenges of facing a deadly global pandemic. Su asks his readers how we would teach mathematics differently, if we thought of it as a playful sport rather than a performance sport.

A rich resource for answering Su’s question is provided by Teaching Mathematics Through Games. The audience for this book is college-level math intructors who desire to add a bit of fun to their curricula. The goal is to elicit more enjoyment and engagement in courses ranging from general education through upper-level electives, including independent research projects.

There is a long history of connections between mathematics and games. Games have been more traditionally used in teaching K–12 mathematics, and this book is an effort to expand that into college-level mathematics. The book is part of the MAA Classroom Resource Materials series. As an MAA publication, its pedagogical sensibilities are informed by the MAA’s Instructional Practices Guide 3. The emphasis is on collaborative learning, classroom community, persistence in problem solving, and inquiry-based learning.

The editor, Mindy Capaldi, is a Professor of Mathematics and Statistics at Valparaiso University whose research interests are in mathematics education and the scholarship of teaching and learning. Capaldi, along with her undergraduate coauthor, Timothy DeRolf, contributed the final chapter of the collection on using the game Carcassonne to explore mathematics. For those, like me, unfamiliar with the game, Carcassonne is a tile-based game, named after a medieval French fortified town famed for its city walls, in which players randomly draw tiles and lay them out to earn points by building cities, roads, monasteries, and fields. Capaldi describes how she has used Carcassonne for many years to reinforce ideas from probability, Bayes’ Theorem, and expected value in a Finite Mathematics course. DeRolf follows up with a description of an undergraduate research project in which he explored ideas from abstract algebra and topology in the context of the game. This chapter exemplifies the diversity of curricular levels that the book addresses.

The other sixteen chapters are collectively written by twenty-nine authors who represent a variety of instutional sizes and missions, including community colleges, liberal arts colleges, and regional state universities. The authors are mostly mathematics faculty members with a few mathematics education faculty in the mix. Many, although not all, are self-professed “gamers.” I certainly would not describe myself as such, although like most people, I enjoy playing games. Moreover, like most mathematicians, and if this book is successful, many math students, I enjoy trying to understand the strategy and structural underpinnings of games that I play.

According to the preface,“The primary goal of Teaching Mathematics Through Games is to inspire instructors of mathematics as well as present the tools necessary for them to incorporate games into their classrooms.” The chapters are self-contained, and as such can be used independently by the reader for either inspirational or practical purposes. However, the editor encourages the reader to read all of the chapters, “as you may be surprised at what inspires you.” I would recommend this as well, as in doing so I learned a variety of enjoyable and useful tidbits about games, mathematics, and pedagogy.

With a focus on the practical as well as the inspirational, the “chapters are intended to allow for easy adoption of materials with as little work as possible required by an instructor.” A key feature of the material is that all of the resources are classroom-tested. The authors thus credibly describe how to implement their ideas and are able to point out potential pitfalls along the way.

Another attribute of the collection in service of usability is its variety. The chapters are organized in order to proceed from topics with broader appeal to more specific, upper-level mathematics courses. In addition to varying curricular levels, the chapters are also varied in their representation of type of game, mathematical topic, and length of activity.

Games discussed include commercial favorites (at least in our household), such as Risk®, Apples to Apples®, and SET®. Other familiar games that are represented range from the childhood favorite of Tic-Tac-Toe, to several casino games such as Roulette and Keno, to the ubiquitous Sudoku. There are even games developed by the authors for exploring abstract mathematical ideas (Bandits on a Wall by Michael P. Allocca and Jennifer Franko Vasquez) and for developing quantitative literacy while exploring structural inequities (Fantasy Forest by Vivian Y. Lim and colleagues).

You may expect any collection exploring mathematics and games to include ideas from probability, Markov chains, game theory, combinatorics and graph theory, and this book is no exception. Other mathematical topics featured in the book include calculus, number theory, eigenvalues/eigenvectors, group actions, symmetries, data analysis, and hypothesis testing. The intended duration of the activities ranges from one class period (representing about half of the chapters), to semester-long projects, with a few in between. The section “How to Use This Book” includes a helpful roadmap so that you find what interests you based on the course, length of activity, and mathematical topic.

Another aspect of the book that aids its usability is the common structure employed throughout the chapters. Each chapter begins with an introduction and overview introducing the game and the context in which it has been used by the author(s). This is followed by a section in which the game is more fully described and an outline of how the game can be used in the relevant course(s) is provided. Each chapter ends with a conclusion and suggestions for additional directions for exploration. The hope is that the reader will be able to use the materials as ending points or starting points, by “expand[ing] upon an idea by using a different game or applying the given game in a new way.”

Some chapters include further aids to classroom implemention in the form of appendices and/or supplemental materials available via a link from the book’s page on the AMS bookstore. The supplemental materials range in scope from a one-page handout (for the chapter on analyzing Tic-Tac-Toe) to a zip file containing several files such as assignments and implementation notes (for using and building upon Fantasy Forest to develop quantitative literacy).

The book’s greatest strength is its breadth. For a slim (159 pages) volume, the amount of material included is considerable. Moreover, its inherent variety gives it broad appeal. It ranges in complexity from the simple familiarity of Tic-Tac-Toe to open research questions in mathematics that would be of interest to many AMS members.

Some of my favorite chapters were those addressed to “gamifying” pedagogy by mimicking well-known and popular games in order to develop mathematical communication skills. The chapter by Jacob Heidenreich uses the game Battleship as a model for helping students correctly use mathematical language and build conceptual understanding when studying functions. The chapter by Kayla Blyman and Marie Meyer uses the game Telestrations® as a model for helping students represent and communicate mathematics in multiple ways, with examples of implementation in a wide variety of courses. The commercial version of Telestrations® is a favorite of my family, because it is almost always guaranteed to produce shared fits of side-splitting hysteria. I doubt that the in-class version would have quite the same result, but it gives me confidence when the authors attest that it has the effect of almost “tricking their students into learning because they are having so much fun playing the game.”

Much of the material offered here meets the stated goal of ease of use. However, the one critique I would offer is that the book is somewhat uneven in that regard. It seems to me that some of the chapters with more sophisticated and less familiar games (e.g., Arkham Horror), deeper mathematical ideas (e.g., topological linear algebra), or more extended and intricate in-class implementation (e.g., a semester-long project exploring structural inequity through a simulation game) are not quite “plug and play.” Nevertheless, interested readers with the virtues of patience and perseverance will find rich rewards throughout.

The book description on the back cover asserts that “Active engagement is the key to learning,” which is a well-attested claim 4. The book’s cover art nicely evokes the connections between mathematics and games, with its call-out to Chutes and Ladders® using images of game implements and mathematical objects in place of the childhood activities shown in the commercial version. In addition, it demonstrates the authors’ shared philosophy that teaching mathematics through games will promote curiosity, stimulate student questions, and support active and engaged learning, with the three characters shown in turn considering the outcome of a dice roll, wondering about a hand of cards, and reaching towards the next higher level of mathematical play.

In fact, look closely! There are no chutes, only ladders. Thus, the book provides a resource for inviting our students higher up and deeper into the “game” of mathematics. I look forward to using many of the ideas and resources presented here to bring elements of fun to my courses in hopes that my students will, “snap!,” find learning mathematics to be an unexpectedly sweet game. 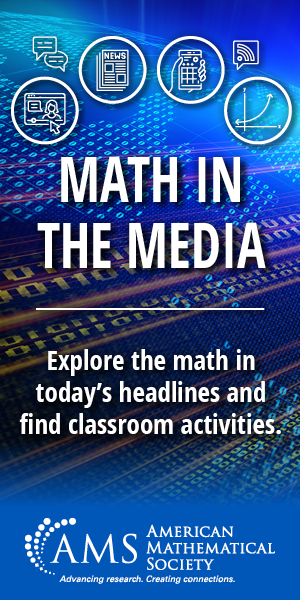