Mathematics Events at the 2016 AAAS Meeting

The 2016 annual meeting of the American Association for the Advancement of Science (AAAS) took place in Washington, DC February 11-15. About 9,000 people attended the meeting, including those who attended Family Science Days on the weekend. Below are brief descriptions of some of the mathematics-related symposia as well as a slideshow of photos from the meeting.

Partnering with Africa through Applied Mathematics

Lotfi Hermi, University of Arizona, spoke about the rich scientific history of Tunisia and the current huge unemployment among college graduates there. Thierry Zomahoun, of AIMS and the Next Einstein Initiative, explained his work and the work AIMS does training mathematicians, scientists, and engineers, as well as recent training of math teachers. He pointed out that there are more African scientists and engineers in the U.S. than in Africa.

Dmitri Tymoczko, Princeton University, explained how vectors and topology could help understand music. He noted that his study of composers has shown that how Bach's music, for example, moved along a path from one chord to another is different than what is presented in music theory books. David Wright of Washington University introduced the ratios between notes and talked about the difference between the true intervals associated with notes and the intervals on a piano.

Here's a slideshow of photos of the symposia and booth. 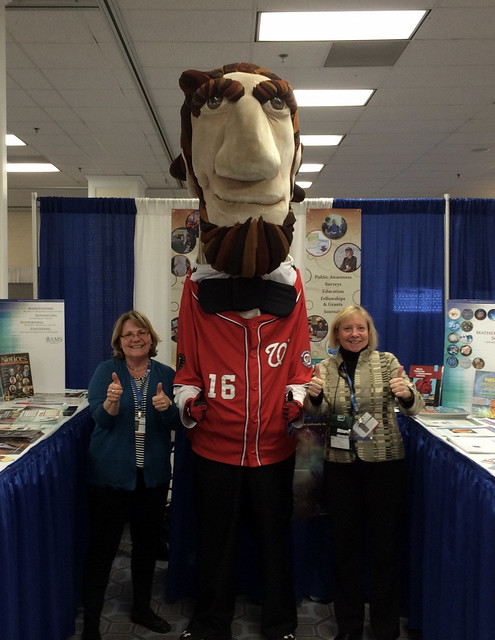 The 2017 AAAS annual meeting will be in Boston (MA), February 16-20. The AAAS website has more information.