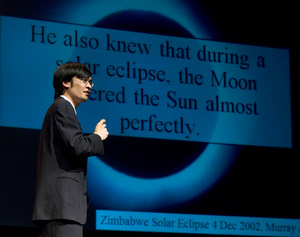 An overflow crowd of approximately 900 people saw Terence Tao's 2010 Einstein Lecture, "The Cosmic Distance Ladder," which took place October 9 as part of the AMS Fall Western Sectional meeting at UCLA. In addition to the audience in Schoenberg Hall, people watched in an overflow room and on a Jumbotron screen set up outside.

In the lecture, Tao addressed how we know the distances from the earth to the sun and moon, from the sun to the other planets, and from the sun to other stars and distant galaxies. These distances can't be measured directly, but there are many indirect methods of measurement, combined with basic mathematics, which can give convincing and accurate results without the need for advanced technology. These methods rely on climbing a "cosmic distance ladder," using measurements of nearby distances to deduce estimates on distances slightly farther away.

Below are a video (from the UCLA YouTube collection, also at iTunes U [UCLA-mathematics]) as well as slideshows from the lecture and the reception--hosted by the UCLA Department of Mathematics and the AMS--that followed.

The AMS Einstein Public Lectures in Mathematics began in 2005 to celebrate the 100th anniversary of Albert Einstein's annus mirabilis, when he published three fundamental papers that changed the course of twentieth-century physics. The lectures are given annually at one of the Society's eight sectional meetings and are supported by a gift from an anonymous donor.