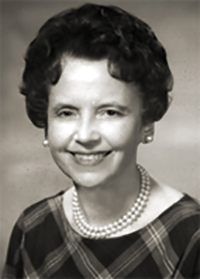 The AMS Mary P. Dolciani Prize for Excellence in Research recognizes a mathematician from a department that does not grant a Ph.D. who has an active research program in mathematics and a distinguished record of scholarship. The primary criterion for the prize is an active research program as evidenced by a strong record of peer-reviewed publications.

Additional selection criteria may include the following:

The prize amount is $5000, awarded every other year for five award cycles.


Amanda L. Folsom receives the 2021 Mary P. Dolciani Prize for Excellence in Research for her outstanding record of research in analytic and algebraic number theory, with applications to combinatorics and Lie theory, for her work with undergraduate students, and for her service to the profession, including her work to promote success of women in mathematics.

Nominations should include a letter of nomination, the nominee's CV, and a short citation to be used in the event that the nomination is successful.