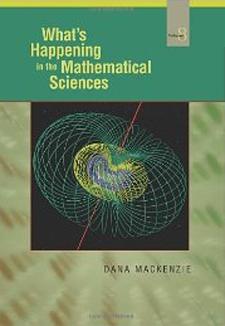 Available in softcover from the AMS Bookstore 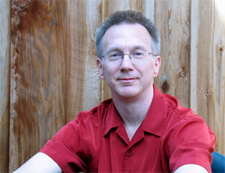 Dana Mackenzie was born in 1958and wrote his first book at the age of five. While The Littlest Inch warm [sic]never got past its original limited edition of one copy, it did foreshadow a lifetime love of writing. Mackenzie’s love of mathematics also surfaced at an early age. He eagerly read every book by Martin Gardner, discovered the formula for triangular numbers in sixth grade, and in the ninth grade discovered that i has a square root. Fortunately, his teachers didn’t tell him that these things were already known. After majoring in mathematics at Swarthmore College, Mackenzie earned his Ph.D. from Princeton University in 1983. He taught for six years at Duke University and seven years at Kenyon College. During that time, he received the 1993 George Pólya Award from the Mathematical Association of America.In 1996, while surfing the newfangled Worldwide Web, Mackenzie found out about the Science Communication Program at the University of California at Santa Cruz. It was another “eureka” moment, as he saw for the first time how to combine his passions for mathematics and writing. The program taught him the ropes of journalism and launched him on a new career as a freelance mathematics and science writer. Since 1997 Mackenzie has written for such magazines as Science, New Scientist, American Scientist, and Smithsonian. His first trade book, The Big Splat, or How Our Moon Came to Be, appeared on Booklist magazine’s best-of list for 2003 and was one of Audible.com’s audiobooks of the year for 2010. While he enjoyed writing about other sciences, he still felt his portfolio was incomplete without a book about the subject he knew best. Princeton University Press will publish his first full-length popular book about mathematics, titled The Universe in Zero Words, in 2012. Mackenzie still lives in Santa Cruz with his wife, Kay, and an ever-changing array of foster animals. Learn more at Dana's site . . .

What's Happening in the Mathematical Sciences showcases the remarkable recent progress in pure and applied mathematics. Once again, there are some surprises, where we discover new properties of familiar things, in this case tightly-packed tetrahedra or curious turtle-like shapes that right themselves. Mathematics also has played significant roles in current events, most notably the financial crisis, but also in screening for breast cancer. The Netflix competition to find a better algorithm for recommending videos to subscribers demonstrated how deeply mathematics is used behind the scenes in our everyday lives.

Mathematicians have settled several important conjectures in the past few years. In topology, the recently solved Kervaire invariant conjecture tells us about exotic spheres in high dimension. The Weinstein conjecture, proved by Cliff Taubes, guarantees periodicity in certain important dynamical systems. A very old dynamical system--the game of billiards--received two innovative makeovers. First, mathematicians proved the existence of "wandering" trajectories in an inside-out version of the game, called "outer billiards," which some researchers consider a toy model for planetary motion. Second, mathematicians proved two different versions of the Quantum Unique Ergodicity conjecture, which says that a quantum-mechanical billiard ball behaves, in the long term (and at high energies) similarly to a classical billiard ball. The proof uses ideas from pure number theory dating back to Ramanujan. Finally, in another area of statistical physics, mathematicians showed that the transition from an unmixed to a mixed system often happens, relatively speaking, in the blink of an eye.

Dana Mackenzie, a science and mathematics writer, makes the mathematics and the applications easily comprehensible, by calling on common sense or on similar but familiar phenomena. The stories invite you into the exciting world of modern mathematics, with its thrill of discovery and the anticipation of what is still to come. Anyone with an interest in mathematics, from high school teachers and college students to engineers and computer scientists, will find something of interest here. The stories are well told and the mathematics is gripping.

The goal of the series is to shed light on topics on the leading edge of mathematical research in a way that is accessible to the mathematical layperson. The articles frequently combine mathematics with physics, and are written in a lively style that should be accessible to anyone with genuine interest and some college-level experience in mathematics and science.
Reviewed on 2011-05-04

A fascinating read. by Ilia Rushkin, Plus Magazine

The author's way of presenting the material is vivid, simple and engaging. The narrative is illustrated [with] beautiful pictures. For those with a mathematical background . . . it will make a fascinating read.
Reviewed on 2011-05-04