I create geometric patterns in the snow, walking along the frozen lakes of Savoie, France in snowshoes. On average the works take about 10 hours to really do it properly, some are a little unfinished, if my feet get cold or hurt too much. The setting out is done using handheld orienteering compass and distance determination using pace counting or measuring tape. Curves are either judged or arcs of circles are made using a clothesline attached to an anchor at the centre. Designs are chosen from the world of geometry. The Koch curve and Sierpinski triangle in this album are among my favorites. The works are very large (the size of several soccer fields), and many of the mathematical patterns appear 3D, especially when viewed from above. more recently I've also created patterns in the sand.
— Simon Beck 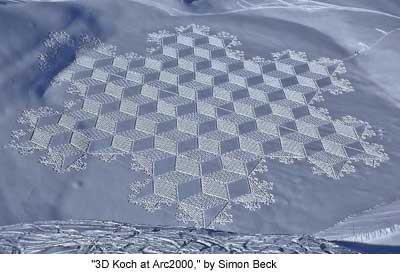 Pattern made in snow with snowshoes. This is from my Facebook album titled Reinterpretations. This means the photos have been modified using the well-known program by Adobe. In general I shrink the horizontal dimension, darken the highlights a little, increase the contrast, shift the blue/red balance towards the blue, and increase the colour saturation. The grid of hexagons was surveyed working outwards from the centre, then the fractal exterior was added. 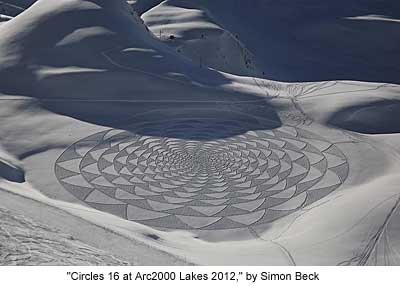 Pattern made in snow with snowshoes. This was done using the faintly visible ghost of an earlier design on the same site. Enough was visible despite recent snow fall for me to be able to find the corners of the roughly triangular figures without having to do any surveying. One person likened this image to a crocheted doily, another to a crop circle. This was done in 2012 at ARC 2000 is a ski area in France. 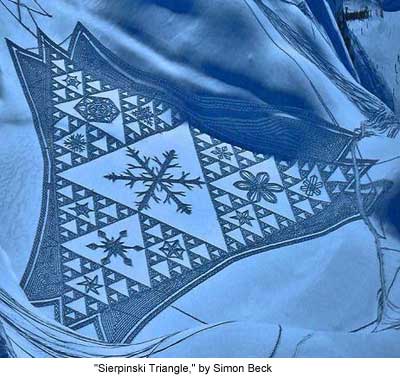 Pattern made in snow with snowshoes. This work is a variation on a Sierpinski Triangle. The S Triangle is a simple iterative process. Start with the largest triangle, find the midpoints of each edge, draw another triangle linking the midpoints, resulting in 4 triangles, then leave the middle triangle alone and repeat the process on the 3 other triangles. 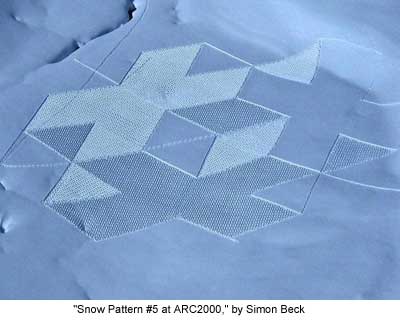 Pattern made in snow with snowshoes. The attempt at the 3D effect has been reasonably successful except where I ran out of reasonably flat snow! These bluish pictures have been processed in Photoshop and distorted to improve the proportions. This was done with Roberto Lebel at ARC 2000, a ski area in France. 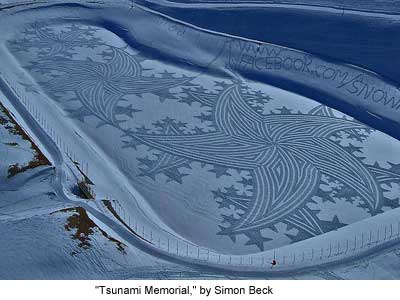 Pattern made in snow with snowshoes. The design(s) are a 5 pointed version of the 'snowflake curve' named by the German mathematician Von Koch. A lot of the inspiration for the snow art comes from the gardens in the temples in Kyoto, where sand is raked in patterns that are the closest thing I have seen elsewhere to the effect I achieve with snow. This work, created on the reservoir at Arc2000, took somewhere between 10 and 15 hours, and was completed in March 2012. On my Facebook there is an incomplete version of this photo that shows the skeleton of the smaller 5-pointed figures, that shows how this has been done. 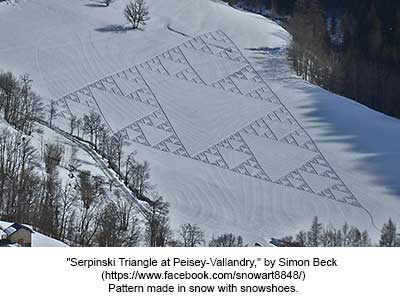 Pattern made in snow with snowshoes at Peisey-Vallandry. 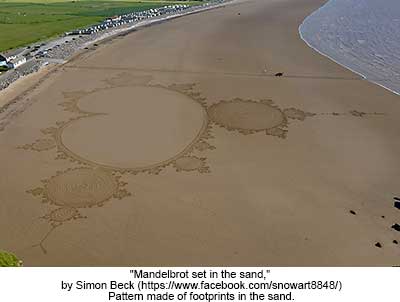 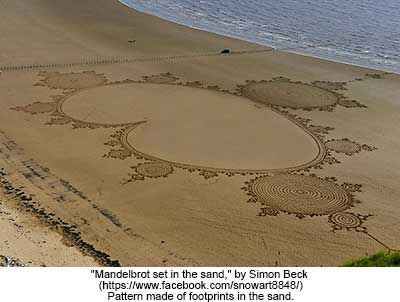 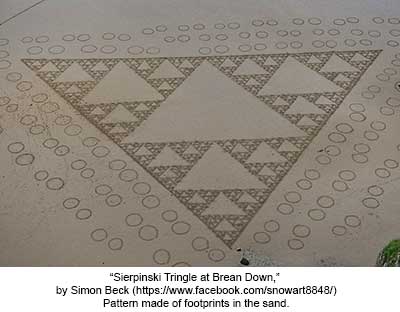 [Above views of Mandelbrot set in the sand] Pattern made of footprints in the sand and a rake as a tool at Brean Down in the U.K. It's a race against the tide, it's nine hours of furious work. Find a time lapse video of the creation