Computers make it possible for me to "see" the beauty of mathematics. The artworks in the gallery were created using a variety of mathematical formulas.
— Anne M. Burns 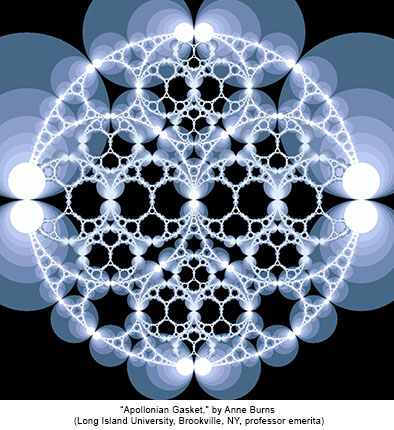 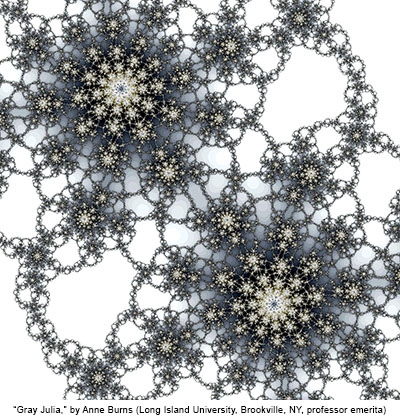 This is the Julia Set of a rational function that has a pole of order 3 at the origin. The white regions are 'pre-poles'; that is, a point is colored white if its orbit enters the "trap door" surrounding the pole. A point is colored black if its orbit remains bounded. All points except the black points have an orbit that eventually escapes. The number of iterations it takes for the orbit to escape determines the color. 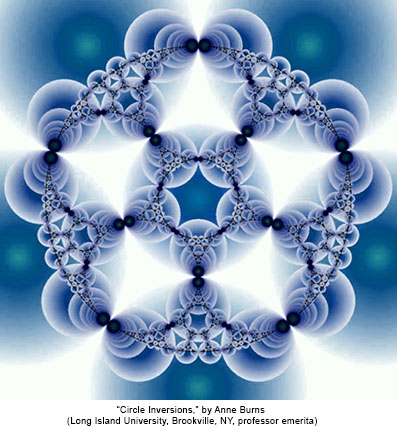 5 large circles are inverted in the unit circle. Then repeated inversions of each new circle into the circles to which it is tangent are applied. 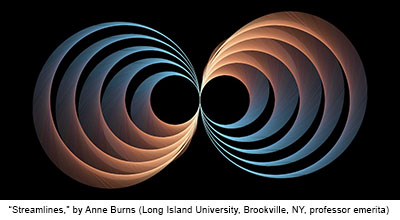 The streamlines of the vector field $dx/dt = x^2 - y^2, dy/dt = 2xy$ (the real and imaginary parts of the complex function $f(z) = z^2$ ) are the directed paths along which the tangent vector is equal to $(dx/dt, dy/dt).$ They are circles tangent to the real axis. the attached vectors are colored according to their slope. 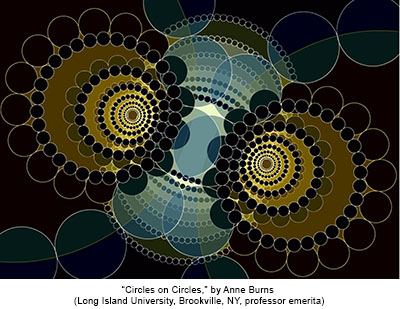 A loxodromic Möbius transformation has two fixed points, one attracting and the other repelling. Starting with a small circle around the repelling fixed point and repeatedly applying the Möbius transformation results in a family of circles that grow at first, each containing the previous one. Successive images eventually pass over the perpendicular bisector of the line connecting the fixed points and shrink down as they are attracted to the other fixed point. Each circle in a second family of circles passes through the fixed points and is mapped to another circle in that family. Each circle in the second family is orthogonal to every circle in the first family. 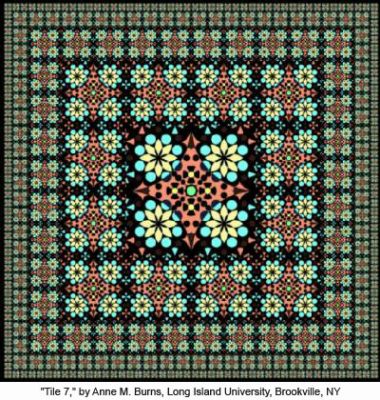 Here is a fractal tiles work created with Geometer's Sketchpad. I start with a single "tile" designed using Geometer's Sketchpad. Then, using Flash Actionscript I place that "tile" in the center of the screen and surround it with 12 copies of the tile that are half the size of the original, then surround those with 36 "tiles" half the size of the second set of "tiles"; the process is continued until the tiles are too small to see. Thus we obtain a "fractal" tiling. 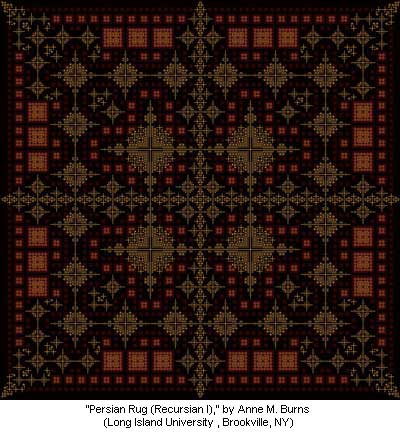 An applet uses a recursive (repeatedly applied) procedure to make designs that resemble Persian rugs. You may choose 3 parameters $a, b$ and $c$, and one of 6 color palettes each consisting of 16 colors numbered 0 through 15. The parameter $c$ ( 0 through 15) represents an initial color. A 257 by 257 square is drawn in the color numbered $c$. Label the 4 corner colors $c1, c2, c3$ and $c4$ (at the initial stage they will all be $c$). then a new color is determined by the formula $a + (c1+c2+c3+c4)/b \mod 16$ and a horizontal and vertical line that divide the original square into 4 new squares are drawn in the new color. The procedure is repeated recursively until all the pixels are filled in.

All of the Circle Pictures are made by iterating systems of Möbius Transformations. 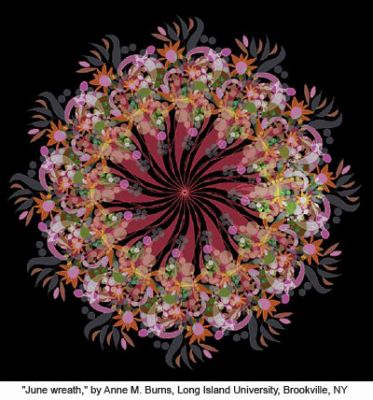 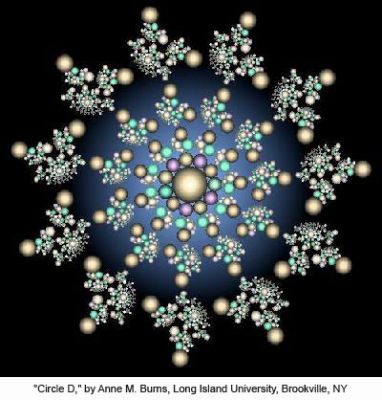 Interpreting a complex valued function as a vector field over its domain provides a wealth of opportunities for producing visually appealing images. Starting with a plot of the vector field over a rectangular grid and assigning colors as functions of length and/or direction we easily discern the multiplicities of the zeros and poles of the function. Plotting the vector field of the function only along certain paths, inventing functions for assigning length and color to each vector produces some beautiful images. 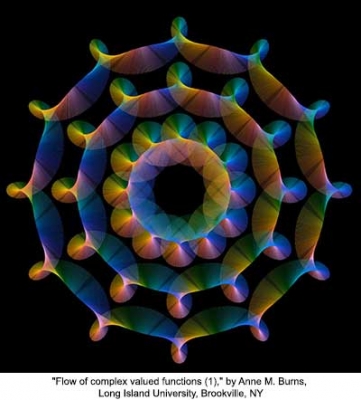 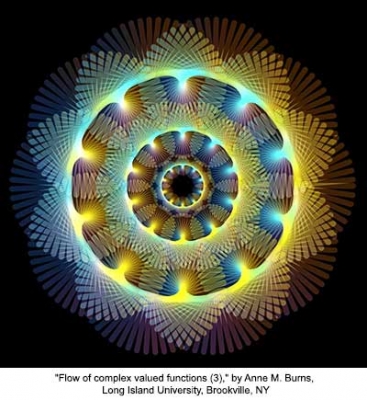 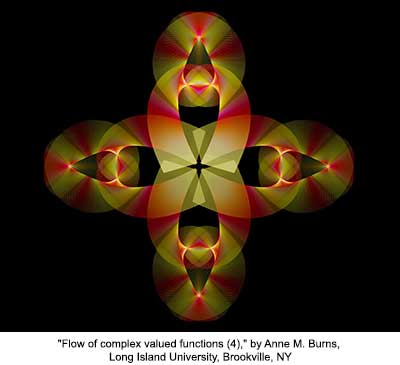 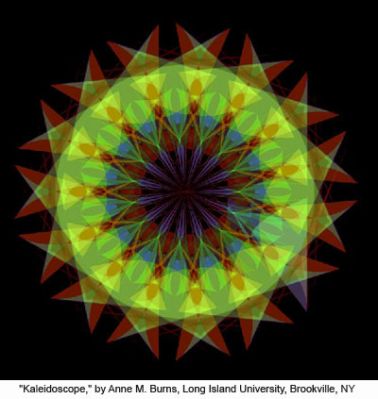 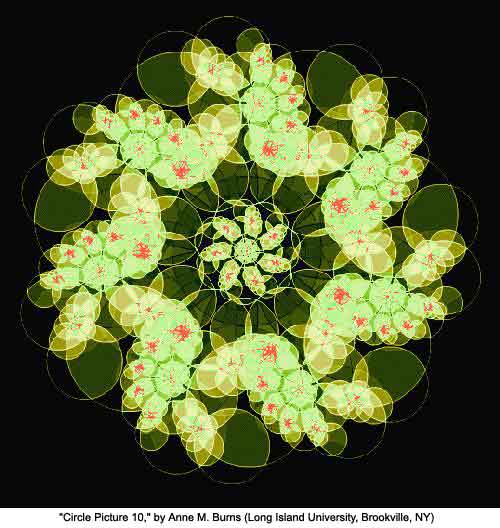 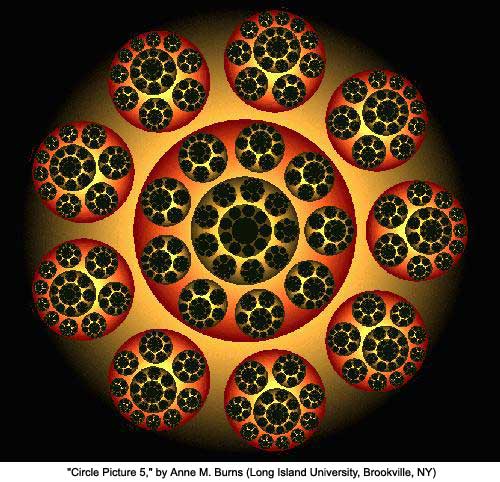 The "Mathscapes" artworks in this gallery were created using a variety of mathematical formulas. The clouds and plant life are generated using fractal methods. The mountains are created using trigonometric sums with randomly generated coefficients; then, using 3-D transformation, they are projected onto the computer screen. Value and color are functions of the dot product of the normal to the surface with a specified light vector. 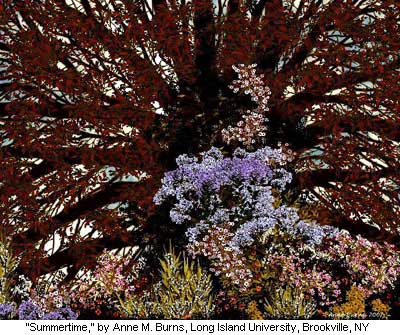 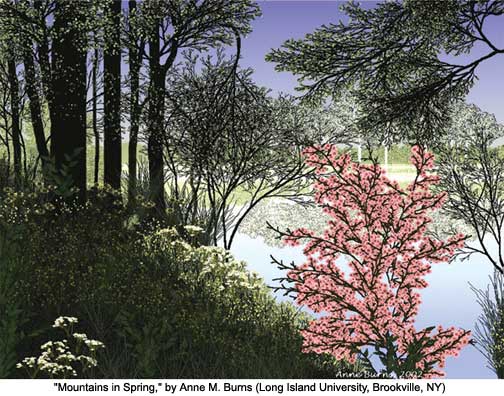 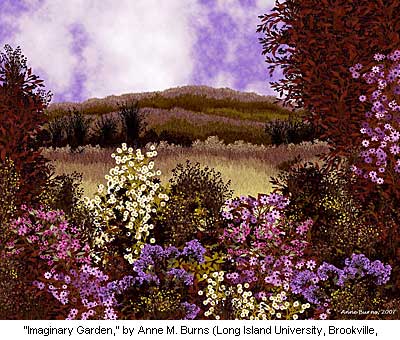 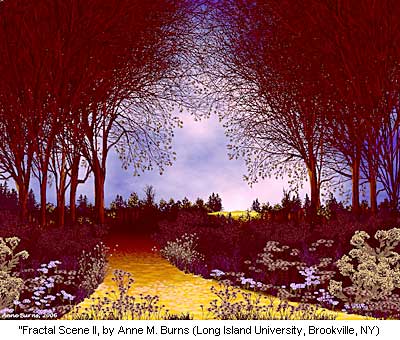 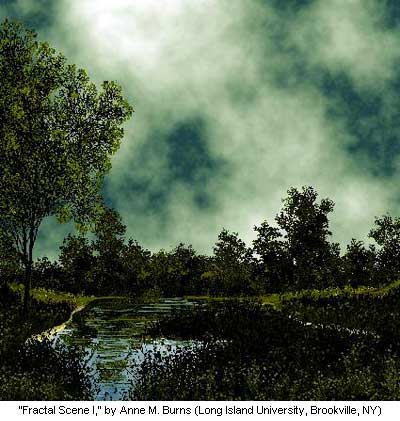 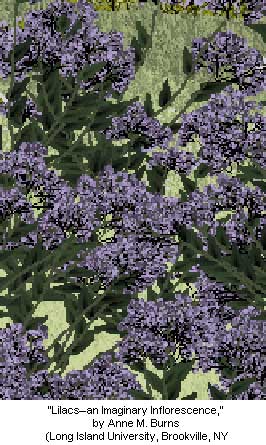 "Inflorescence" is the arrangement of flowers, or the mode of flowering, on a plant--sometimes simple and easily distinguishable, sometimes very complex. "Lilacs" is an example of an imaginary inflorescence that I have created using computer graphics techniques. Two Java applets allow users to see and draw purely imaginary inflorescences at various stages using the recursive (repeatedly applied) functions.