Weavers of beads use a needle and thread to sew beads together to make decorative objects including jewelry, wall hangings, sculptures, and baskets. Some bead weave designers weave beads into composite clusters, usually with at least one large hole, called beaded beads. Mathematically, many beaded beads can be viewed as polyhedra, with each bead (or, more precisely, the hole through the middle of each bead, which provides its orientation) corresponding to an edge of the polyhedron. Different weaving patterns will bring different numbers of these "edges" together to form the vertices of the polyhedron. So it is very natural to use various polyhedra as the inspiration for beaded bead designs. Mathematics, including geometry, symmetry, and topology, is an inspiration for the structure of these woven bead creations. Across cultures and continents, humans show a natural affinity towards the aesthetic of pattern and order, and this art form appeals to this aesthetic in a tactile, tangible form.
— Gwen L. Fisher 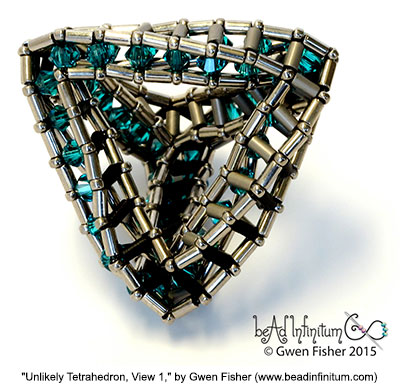 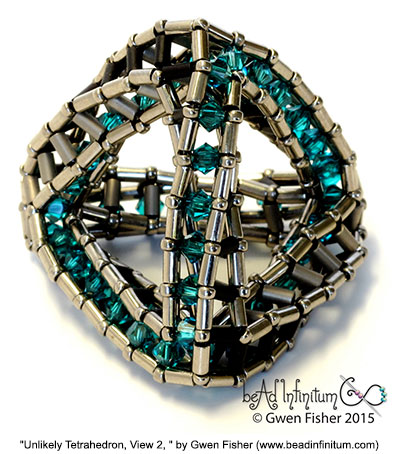 [Above Unlikely Tetrahedron views] Materials: size 15° seed beads, 3 mm bugle beads, 3 mm Swarovski crystal, thread. 34 mm on an edge. I applied the beading techniques I used to turn Impossible Triangles into beaded art objects to a tetrahedron. The Unlikely Tetrahedron generates no corresponding optical illusion. The faces form three distinct paths that twist around the sculpture in unexpected ways. Each beam includes all three colors of faces, with one color on two opposite faces. Like a Möbius band, as you follow a path around the piece, sometimes when you get back to a beam, you return to the opposite face. Thus, it feels like you have to travel around the sculpture twice just to get back to where you started. 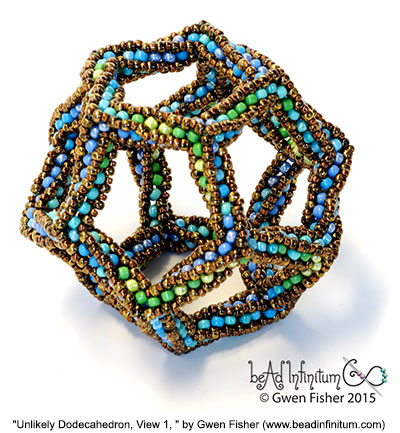 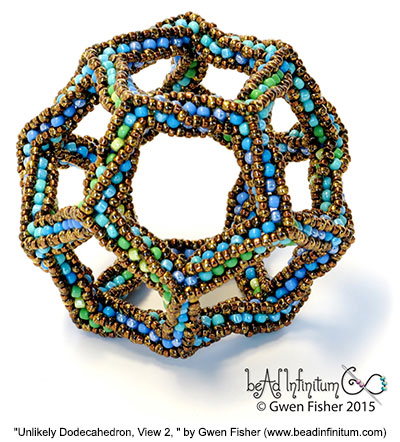 [Above Unlikely Dodecahedron views] Materials: size 15° and 11° seed beads and thread. 23 mm on an edge, 58 mm diameter. I applied the beading techniques I used to turn Impossible Triangles into beaded art objects to a dodecahedron. The Unlikely Dodecahedron generates no corresponding optical illusion. The faces form ten distinct paths that twist around the sculpture in unexpected ways. 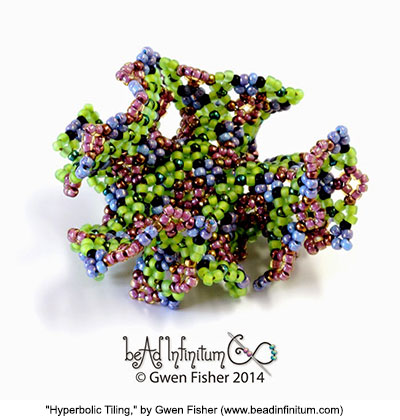 Materials: size 11° seed beads and thread. 63 mm diameter. This is a beaded version of the hyperbolic rhombitetrahexagonal tiling. This tiling is composed of squares and hexagons with three squares and one hexagon around every vertex. I made two of the types of squares green to emphasize the stripes in the tiling. The other type of square is purple, and the hexagons are pink. To make this tiling with bead weaving, I used an across-edge weave. In particular, for the squares, I weaved loops of four beads of the same color for each square, and loops of 6 beads for the hexagons. Then, I attached the loops with one bead per adjacent pair. So the holes of the beads that lie on the edges of the tiling are perpendicular to the the edges. 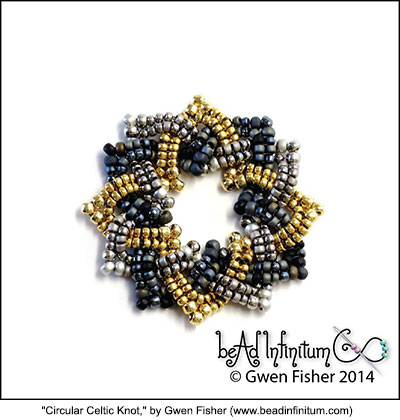 Materials: size 11° and 15° seed beads and thread. 34 mm diameter. Beaded knots are quite flexible. You can turn them inside out, and they can be worn as finger rings, of flatten them to make rosettes for pendants or earrings. This knot is a Brunnian link, meaning that if any one component is removed, then the remaining pieces are unlinked unknots. 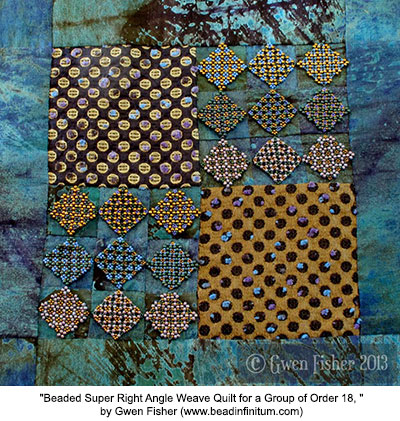 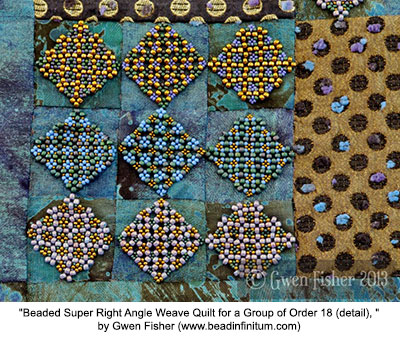 [Above Beaded Super Right Angle Weave Quilt for a Group of Order 18 and detail] Materials: seed beads in sizes 8°, 11°, 15°, thread, silk and cotton fabric, and batting. 13 inches square. This piece began as a study in color for what I call Super Right Angle Weave (SRAW), a bead weave based upon the regular tiling by squares. Each beaded patch is 6 square by 6 squares of the tiling. I weave loops of four beads in each square face and attach these loops across the edges of the tiling with a single bead between the loops. For this set, I use a coloring with three bead types (two types for the faces and one type for the edges). I chose three colors in each of three sizes, for a total of nine different bead types. The 18 patches are arranged in sets of three, where each row uses the same three bead types, but arranged differently. The patches of beadwork correspond to a group of order 18, and Tom Davis identified this group as the generalized dihedral group for E9. 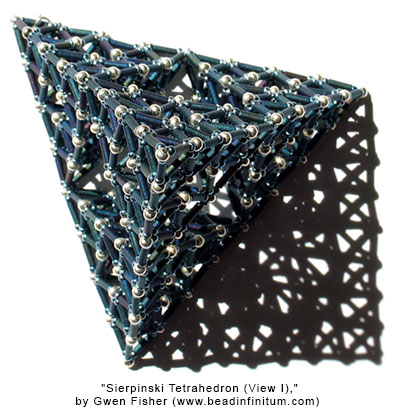 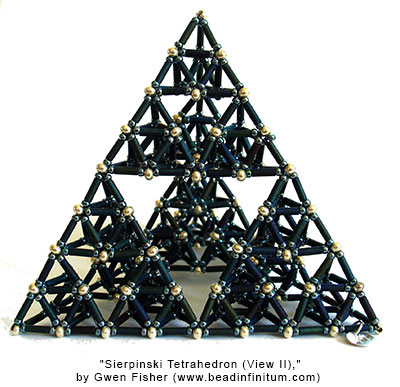 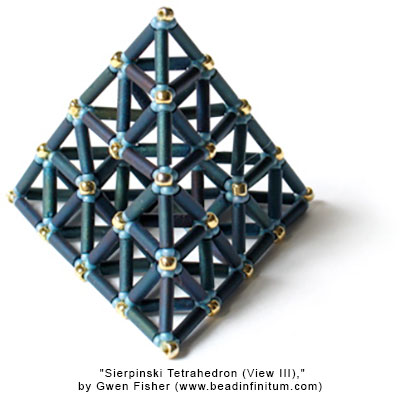 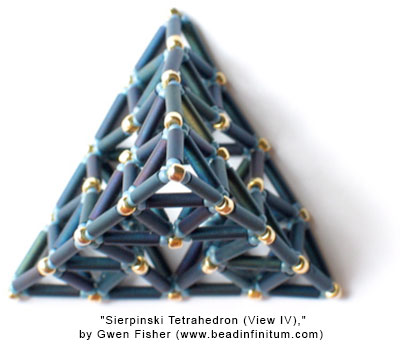 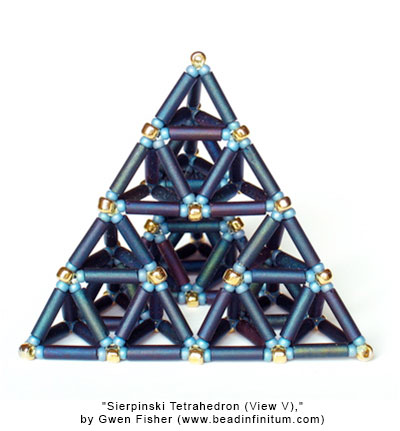 [Above Sierpinski Tetrahedron views] Materials: glass bugle beads, size 11/0 and 8/0 seed beads, Fireline thread. There are several ways to build a polyhedron with beads. One technique that will always work is to align the hole of a bead along each edge of the polyhedron. Then, the thread connects the beads at the vertices of the polyhedron. The most stable polyhedron is the tetrahedron because it is made of all triangles. In a beaded tetrahedron, there are three sets of beads in each loop, like the three sides of a triangle. Any regular tetrahedral beaded bead will naturally require six identical sets of beads, one set for each of the six edges of the tetrahedron. In this case, a set is three beads: a short, a long and a short. Rather than give an example of the simplest tetrahedron, I have used a more complex design based on the structure resulting from the third iteration in the construction of the "Sierpinski Tetrahedron" with its 64 little tetrahedrons. Adding a bead at each interior vertex is necessary to stabilize the structure and make it more rigid.

Materials: white opalite glass, seed beads, Nymo nylon thread. The regular octahedron has 8 triangular faces, 6 vertices each of valence 4, and 12 edges. These 12 edges correspond to the 12 largest (white) beads in the Octahedral Cluster beaded bead. The 6 vertices of the octahedron appear as 6 stars with 4 points each. The 8 triangular faces correspond to where the points of the stars meet. This beaded bead is hollow, yet structurally stable. The stability comes from the way the small beads fit snugly into the spaces between the larger beads. The beaded bead shows virtually no thread; only beads are visible. It is springy between the fingertips and reforms its shape remarkably well. When free from compression, it is round from every angle. 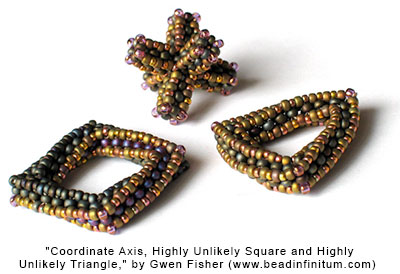 Materials: seed beads, Nymo nylon thread. These three pieces are woven from box stitch (also known as 3D right angle weave), which essentially takes the Cartesian tiling of 3-space with cubes, and places one bead on each edge of some subset of the tiling. With box stitch, rows and columns of cubes (attached face to face) can be woven into any continuous arrangement. Then, I add extra beads at the vertices of each cube to give the object more structure and decoration. The Coordinate Axis shows the basic structure of box stitch, and is also suitable for a game of children's Jacks. The Highly Unlikely Square and Triangle are beaded versions of the Impossible Triangle of Roger Penrose that was made famous by M.C. Escher. Compared with a regular square frame or triangular frame like you might hang on your wall, these frames have one quarter turn on each side. To see the effect of these twists, imagine painting a regular square frame with four colors to identify four paths: inside, outside, front and back. A similar coloring on the Highly Unlikely Square identifies four paths or faces, one of which is outlined with gold seed beads. Starting at the corner closest to the camera traveling clockwise, the golden face is outside, back, inside, front. In fact, all four faces are congruent. The effect of the quarter turns on the Highly Unlikely Triangle is different; there is only one face that travels around the triangle four times. 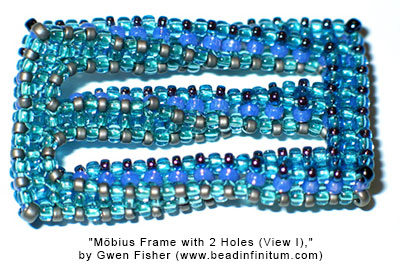 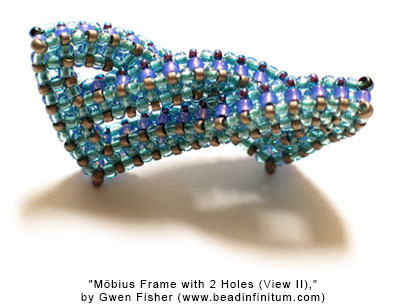 [Above Möbius Frame views] Materials: seed beads, Nymo nylon thread. This Möbius Frame is woven from box stitch (also known as 3D right angle weave), which essentially takes the Cartesian tiling of 3-space with cubes, and places one bead on each edge of some subset of the tiling. With box stitch, rows and columns of cubes (attached face to face) can be woven into any continuous arrangement. Then, I add extra beads at the vertices of each cube to give the object more structure and decoration. This Möbius Frame represents two distinct mathematical objects. First, one can view this object as assembled from cube (or cube-like) shapes. We might be tempted to try to build such an object from wood using three long beams and two short beams. However, like the Impossible Triangle, this Möbius Frame cannot be built in 3D using all straight lines and right angles. In connecting the beams at their ends, the sides of the beams need to twist. The flexibility of the thread connecting the beads allows the beaded frame to twist to accommodate the necessary turns to build this object in 3D. The second way to view this object is to see it as a patch of an infinite surface with no thickness and two holes. Since the surface has no thickness, ignore the layer of purple beads in the middle. The blue and green coloring of the largest faces shows that this surface has two distinct faces.