These images illustrate a variety of kinds of symmetrical figures; most were produced for "The Symmetries of Things," written with John H. Conway and Heidi Burgiel (A.K. Peters, 2008), using a variety of proprietary software tools.I have been interested in geometry, pattern, and mathematical illustration of one form or another since I was a child. Abstraction is the basis of the power of mathematics, but too often we forget that mathematics is also a descriptive language, with meaning anchored in intuitive experience of the world around us. How many students emerge from, say, an undergraduate linear algebra course for math majors, knowing full well proofs of the existence and characterization of eigenspaces and eigenvalues, having no simple, clear idea of what such objects might look like?

Though I am as seduced by abstraction as any research mathematician, I am drawn to mathematics I can see and touch; mathematical illustration, carried out in a graphically rigorous manner, is a natural extension of my work as a mathematician--and indeed may be more fundamental to me.
— Chaim Goodman-Strauss, University of Arkansas 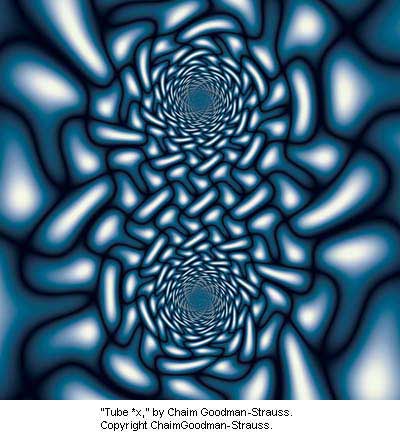 This strange image is just of a distorted but perfectly sensible regular pattern in the Euclidean plane, of type *X. A complicated image like this can be built from simple steps, and can be expressed in just a single formula; the colors of the initial pattern are from the values of $f(x,y) = |\cos(x - \cos(y+a))\cos(y - \cos(x+a))|$, with $a = \pi/5$. 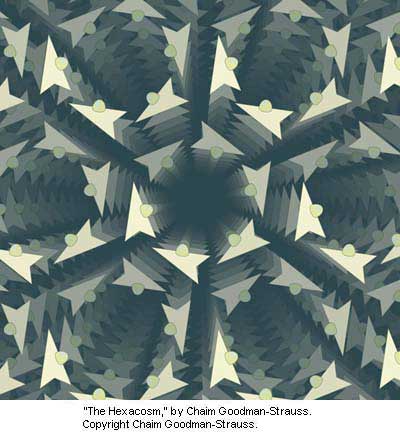 This spaceship is flying about in the universal cover of the hexacosm, one of the ten, closed, flat three-manifolds. Equivalently, the pattern is one of the ten discrete co-compact symmetry types of Euclidean space that does not have any fixed points. The type here is $(6_1 3_1 2_1)$ in the Thurston-Conway fibrefold notation. 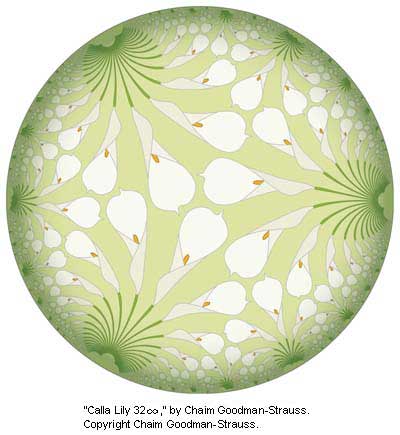 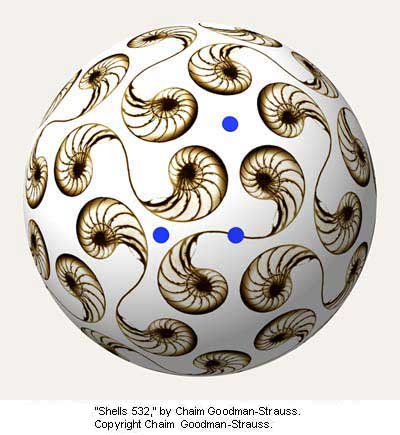 There are seven infinite families, and seven more individual types of discrete symmetrical patterns on the sphere. A pattern of type 532 is shown; there are three kinds of gyration points in the pattern--a 5-fold, a 3-fold, and a 2-fold gyration point are marked. 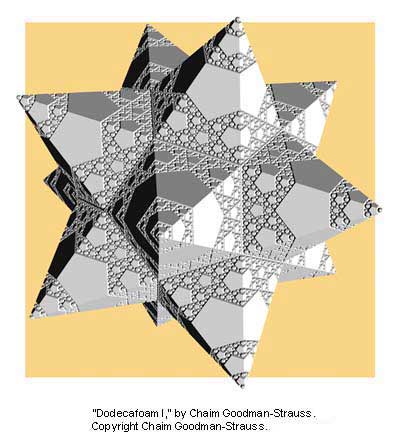 Unlike all of the other images in this collection, the symmetry here is not governed by a group action, but rather by a substitution system--a set of replacement rules, based on the stellations of the dodecahedron. Several oddly shaped three-dimensional cells based on the stellations of the dodecahedron are used; a rule then gives a method for dividing each cell into small copies of the others. Such techniques are commonly used to produce highly ordered non-periodic structures; though it may look as if such a structure repeats, in fact it cannot repeat periodically. 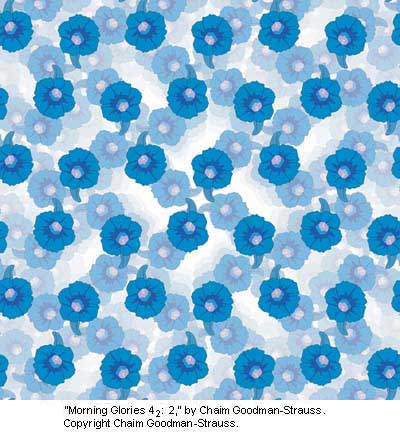 In addition to the thirty-five "prime", discrete symmetry types of three-dimensional Euclidean space, there are 184 "composite", types; these each can be projected down an axis to produce one of the 17 discrete symmetry types of the plane. This pattern in space, for example, with type $4_2 : 2$, is a kind of attenuated planar pattern with type $4 * 2$. 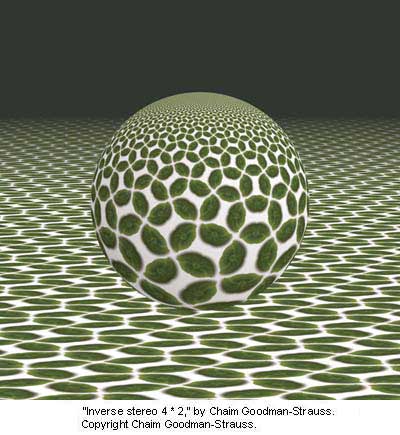 The pattern on this sphere is not a spherical pattern? That is, its symmetry is not a symmetry of the sphere itself. Symmetry is as much as anything a topological property; the pattern on the sphere is in fact a symmetry of the Euclidean plane, as shown by projecting it down to the plane below. Only seventeen types of symmetrical pattern can cover the Euclidean plane; this one has type $4*2$. 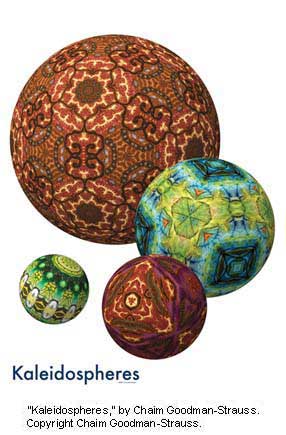 There are five types of kaleidoscopic symmetry on the sphere (two of which are infinite families). Four are shown here: $*532, *432, *332$, and $*22N$. It is quite amusing to make real, physical kaleidoscopes that produce images like these. 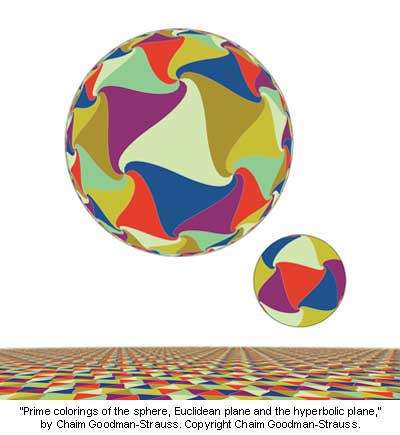 Tilings of the sphere, the Euclidean plane and the hyperbolic plane are shown. In each case, we have triangular faces, but on the sphere, the triangles meet in fives; in the Euclidean plane, the triangles meet in sixes, and in the hyperbolic plane, they meet in sevens. To a great degree, this is forced. It is impossible, for example, to have a tiling of the sphere with triangles meeting only in sevens (try it!). In each case, a prime-fold coloring of the pattern is shown. It is helpful to realize that there are more similarities than differences among the three geometries. The symmetry of the hyperbolic plane pictured above was known to Felix Klein by 1878, and has a tremendous number of interesting topological, geometric and algebraic properties.