As a sculptor of constructive geometric forms, my work deals with patterns and relationships derived from classical ideals of balance and symmetry. Mathematical yet organic, these abstract forms invite the viewer to partake of the geometric aesthetic. I use a variety of media, including paper, wood, plastic, metal, and assemblages of common household objects.
— George W. Hart 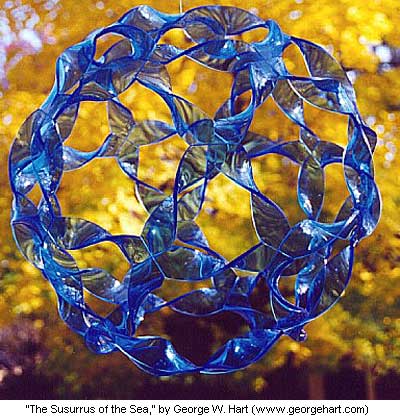 Soft waves, suggestive of both sky and water, travel around the globe along six different criss-crossing equators. The susurrus (murmur) of the sea is suggested as a sense of harmony in this sphere. Technically difficult, the 60 transparent blue acrylic plastic components had to be made very precisely to fit together. Mathematically, the blue spirals are helixes that follow the edges of an icosidodecahedron. This is a polyhedron that was known to the ancient Greeks, but the oldest known drawing of it is by Leonardo da Vinci. Formally constructed of triangles and pentagons (which show up here as the openings) it can also be seen as an arrangement of six equatorial regular decagons. Each equator makes ten twists in a complete path, crossing the other five equators at two opposite points. If one "walks along" a dark blue edge, making right-angle turns where edges meet, one traces a large five-pointed star before returning to one's starting point. 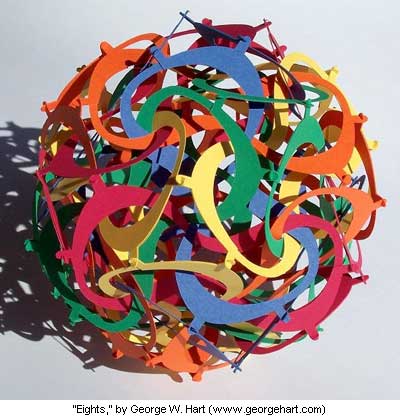 This six-inch diameter paper sculpture is made of sixty identically shaped parts. Parts of any one color form a type of tetrahedron, and there are five such, deeply interlocked. No glue is used; they parts just hook into each other. I call this type of design "modular kirigami". It took me about four hours to assemble after several hours of false starts and figuring out how to do it. I generated a computer-rendered view down a five-fold axis. The "8"-shaped parts each link with many others. So they could not be made as single pieces of paper unless they were glued or taped together after being linked. But I wanted to be a purist and use no glue or tape, so I designed the parts as two overlapping "3"-shaped pieces. 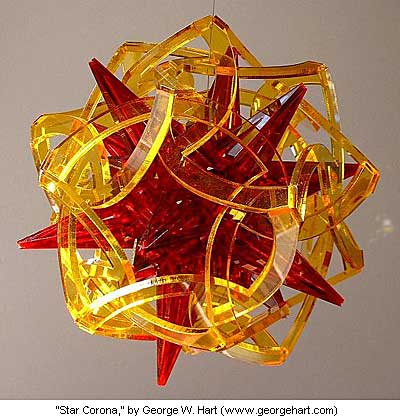 This 8-inch, diameter, one-of-a-kind, acrylic sculpture consists of an inner red star surrounded by a yellow corona. It is designed to hang and the two components do not touch each other. The star has twelve large 5-sided spikes and twenty smaller 3-sided spikes, all assembled from sixty identical angular components. The corona is assembled from twenty identical curved components, which give the effect of swirling motion. If you look straight down on a spike, you see that arms from five of the yellow parts combine to make a circle around the spike. Both components are based on stellations of the icosahedron. The outer corona is based on the first stellation and the inner star shape is based on number 53 in the list by Coxeter et al. To understand it well, make a paper model from the instructions on my website. 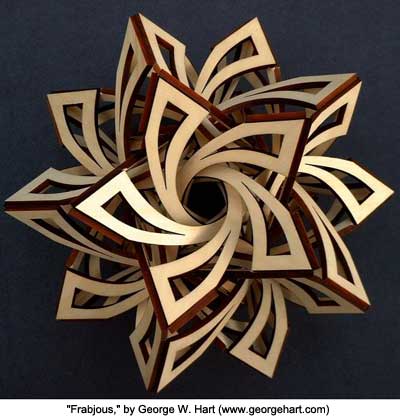 This is an 11-inch diameter sculpture made of laser-cut wood (aspen). It is assembled from thirty identical pieces. Each is an elongated S-shaped form, with two openings. The aspen is quite light in color but the laser-cut edges are a rich contrasting brown. The openings add nicely to the whirling effect. The appearance is very different as one moves around it. This is an image of how it appears looking straight down one of the vortices. The word "frabjous" comes, of course, from "The Jabberwocky" of Lewis Carroll. "O frabjous day! Callooh! Callay!" 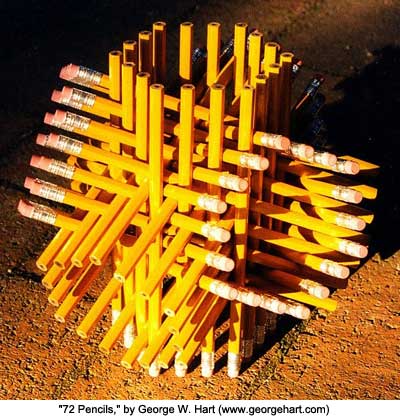 "72 Pencils" is a geometric construction of 72 pencils, assembled into a work of art. The form is an arrangement of four intersecting hexagonal tubes that penetrate each other in a fascinating three-dimensional lattice. For some viewers, part of the interest lies in the form of the interior. The four hexagonal tubes are hollow, so the sculpture as a whole is hollow. But, what shape is its cavity? What would someone on the inside see? To the mathematician, the answer is "the rhombic dodecahedron," a geometric solid bounded by twelve rhombuses. See two other views, showing how it looks along various axes of symmetry. 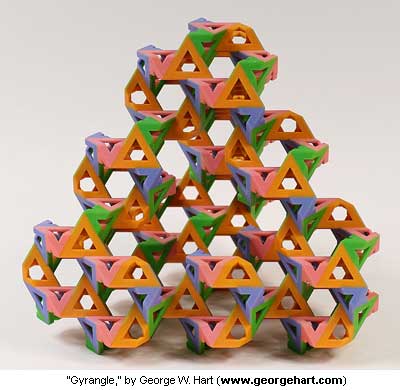 The sculpture is constructed from almost 500 laser-cut steel units, bolted together in a novel way that produces a gyroid surface entirely from equilateral triangles. Shapes come together to reveal a variety of different patterns in the "tunnels" of the sculpture. The first presentation of this interesting geometry was at the USA Science and Engineering Festival in Washington DC, October 2010. The completed 42" sculpture was donated to Towson University. The work is described in detail.