Since high school I have been fascinated by geometry. I enjoyed constructing the more complicated Platonic solids with ruler and compasses, as well as reading about the 4th dimension. While at Bell Labs in Murray Hill, I was introduced to the field of Computer Graphics, and later developed the Berkeley UniGrafix rendering system, so that I could depict objects more complex than I could build. Since then, the focus of my work has been on computer-aided design (CAD) tools – for engineers, architects, and artists. When creating abstract sculptures I see myself as a composer in the realm of pure geometry. The artistic achievement then lies in finding a procedural formulation that can reflect the inherent symmetries and constructive elegance that seems to lie beneath many sculptural master pieces as well as at the foundations of the physical laws of our universe.
— Carlo Séquin 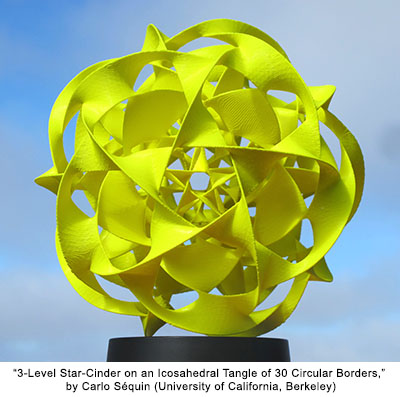 18 x 18 x 18 cm, ABS, 3D-print, March 2019. Inspired by Charles O. Perry's 18-inch sand-cast "Star Cinder" sculpture, I tried to make a similar intricate 2-manifold "soap-film" surface, but one that would fill the spherical volume of this structure more completely. This requires border curves that dive more deeply into the sphere, and closely approach its center. With this goal, I replaced each one of the ten triangular loops forming the borders of the original "Star Cinder" with a set of three interlinked circles. I then constructed a soap-film-like 2-manifold that maintained the full symmetry of the oriented icosahedron and had no self-intersections. This was rather challenging; and was only possible with the help of some special software, NOME (Non-Orientable Manifold Editor) that some students developed for me. 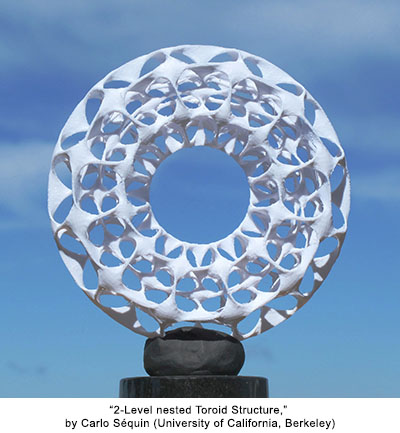 15 x 5 x 15 cm, PLA, 3D-print, May 2019. This demonstrates another approach to make multi-shell “Star Cinder” structures that readily can be used for geometries other than spherical shells. A polygonal mesh on a given surface is expanded into a corresponding ribbon structure. The ribbon segments between two neighboring vertices (replacing an edge of the original mesh) twist through 180 degrees, so that at their mid-point, they have a tangent direction that is normal to the original surface. Next, a shrunken offset surface is constructed and placed inside the original one. On this surface a polygonal mesh is drawn that is the dual of the original mesh; and this mesh is also converted into a structure of twisted ribbons. At the projected mid-edge crossing points, both the outer end the inner ribbon have a direction normal to the two surfaces; thus they can easily be connected with a short ribbon that twists through 90 degrees. On the torus structure depicted here, both the inner and the outer surfaces are simple (12x6) quadrilateral meshes, aligned to exhibit the needed dual relationship. The radially connected ribbon structure is smoothed with three iterations of the Catmull-Clark subdivision process. 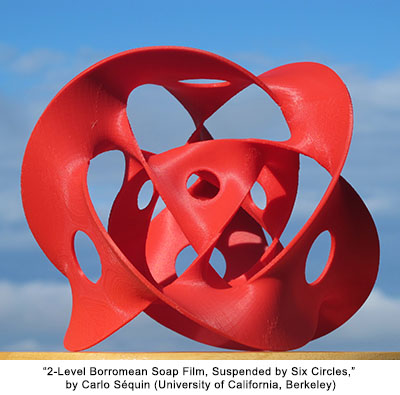 19 x 19 x 19 cm, ABS, 3D-print, October 2018 (exhibited at JMM 2019). This design starts with the simplest Borromean soap film surface. A smaller copy is placed inside so that the two surfaces just touch. The six oval border curves get merged at the six touch points and are smoothed into six interlinked circular loops. To enhance the transparency of this sculpture and allow a better look at the inside geometry, eight small circular holes have been cut into the two sets of 3-sided face patches in the outer and inner levels of the soap film. The resulting 2-manifold is single-sided, of genus 6, and has 6+8 punctures. See more information. 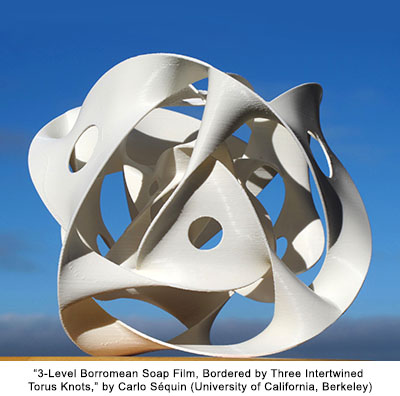 22 x 22 x 22 cm, ABS, 3D-print, October 2018 (exhibited at JMM 2019). Three simple Borromean soap film surfaces have been nested inside one another. Their nine individual oval border curves have been merged into three smooth (2,3)-torus knots. Twelve small circular openings have been introduced for aesthetic reasons. The resulting single-sided 2-manifold has 3+12 borders and is of genus 9. 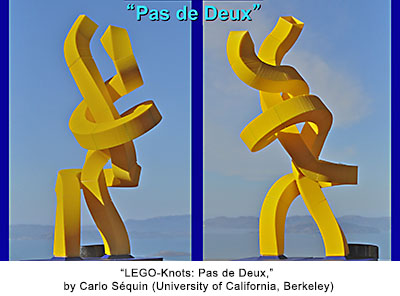 36 cm tall, ABS, 3D-print, January 2014. This is one result of many modular constructions composed from a set of "LEGO-Knot" parts. The parts used in this sculpture are short tubular elements with a square cross section that bend and twist by different amounts. The parts were originally designed to form models of mathematical knots; but they lend themselves just as well to construct free-form sculptural models. 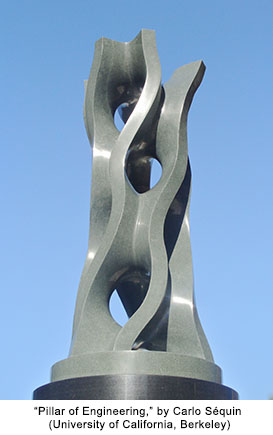 (Design by Prof. Séquin, 2000). 220 cm tall, green and black granite, sculpted by Dingli Stone Carving Art Co., China, installed on the terrace of Sutardja Dai Hall at UC Berkeley on May 31, 2012. The design is based on the central portion of Scherk's 2nd Minimal Surface. It comprises a stack of five monkey-saddles in a gently twisting column. It emerged from a collaboration with Brent Collins, a wood sculptor based in Gower, MO. The design was first used to create a 24 cm tall bonze sculpture, cast and patina'ed by Steve Reinmuth, in his bronze studio in Eugene, OR. Paul Suciu, an alumni of the EECS department at UC Berkeley, liked this design very much and sponsored the carving of a large-scale sculpture from a fine-grained granite in South-Eastern China. Read more about the story of the creation of this work. 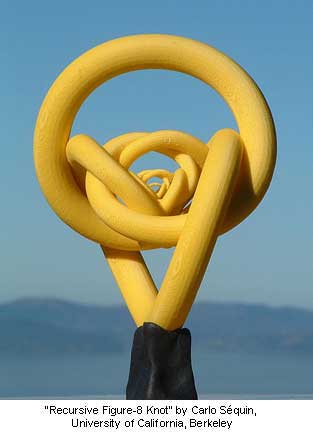 In some depictions of a mathematical knot, some of the meshes formed between the criss-crossing strands resemble the overall outline shape of the whole knot. It is then possible to fit a reduced copy of the knot into every one of these meshes and reconnect the strands so as to obtain again a mathematical knot consisting of a single closed strand. Then this process can be continued recursively resulting in a self-similar pattern. This general process was applied to the 4-crossing Figure-8 knot. But rather than performing this process in a drawing plane as outlined above, subsequent generations of reduced knot instances were placed in planes that are roughly perpendicular to one another, resulting in a truly 3-dimensional sculpture. 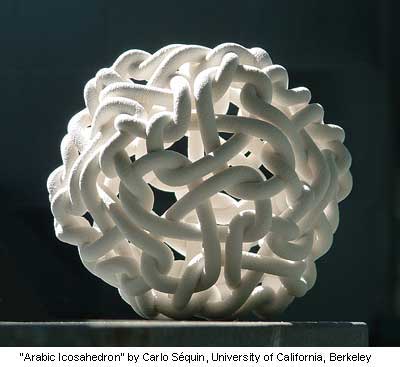 Moorish patterns found in the Alhambra often depict lattices of interlocking knots. Here such a pattern composed of interlocking trefoil knots has been wrapped around an icosahedron. Each of the 20 faces is replaced with a trefoil knot, which interlocks along the triangle edges with three adjacent trefoils. The exact nature of the linking between adjacent trefoils leaves some freedom to the designer: In the simplest case two adjacent trefoils interlock with just one lobe each. In the "Arabic Icosahedron" they are linked with two lobes each, resulting in a much tighter meshing. 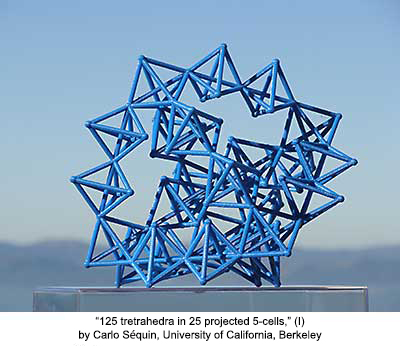 The 5-cell (the four-dimensional simplex) is composed of five tetrahedra. It has been projected into 3D Euclidean space so as to form a three-sided bi-pyramid. Twenty-five of those cells again outline the same projection of a 5-cell, with five cells at the vertices and two cells along each of the ten edges. The whole sculpture comprises 125 small tetrahedra, to celebrate the 125th birthday of the AMS. It was designed with SLIDE at U.C. Berkeley, and fabricated in 571 layers, each 0.01 inch thick, on a Fused Deposition Modeling machine. 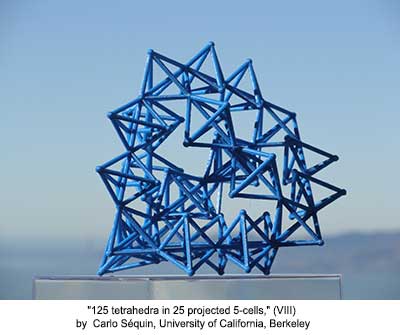 The 5-cell (the four-dimensional simplex) is composed of five tetrahedra. It has been projected into 3D Euclidean space so as to form a three-sided bi-pyramid. Twenty-five of those cells again outline the same projection of a 5-cell, with five cells at the vertices and two cells along each of the ten edges. The whole sculpture comprises 125 small tetrahedra, to celebrate the 125th birthday of the AMS. It was designed with SLIDE at U.C. Berkeley, and fabricated in 571 layers, each 0.01 inch thick, on a Fused Deposition Modeling machine.

The complete graph K12 connects 12 vertices with 66 lines. Of course, in the plane this graph cannot be drawn without many crossings. A surface needs to be at least of genus 6 to allow a crossing-free embedding. With this model I have attempted to find the embedding of highest possible symmetry. The model has the 12-fold symmetry of the oriented tetrahedron. The 44 countries bounded by the 66 lines, and colored differently, are all 3-sided. "My professional work in computer graphics and geometric design has also provided a bridge to the world of art. In 1994 I started to collaborate with Brent Collins, a wood sculptor, who has been creating abstract geometrical art since the early 1980s. Our teamwork has resulted in a program called ?Sculpture Generator 1? which allows me to explore many more complex ideas inspired by Collins? work, and to design and execute such geometries with higher precision. Since 1994, I have constructed several computer-aided tools that allow me to explore and expand upon many great inspirations that I have received from several other artists. It also has resulted in many beautiful mathematical models that I have built for my classes at UC Berkeley, often using the latest computer-driven, layered-manufacturing machines. My profession and my hobby interests merge seamlessly when I explore ever new realms of 'Artistic Geometry'." 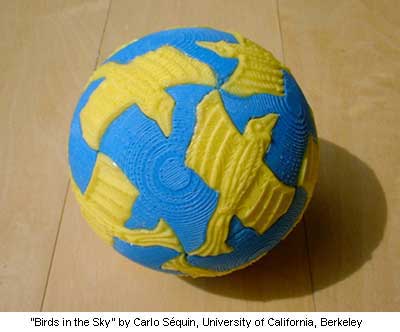 The surface of a sphere is divided into 24 identical regions with the same symmetries as an oriented octahedron. These tiles have bird-like shapes inspired by the work of M.C. Escher. Half the tiles are yellow and have a relief pattern that clearly identifies them as birds. The other 12 tiles are blue without a special relief pattern; they can thus be seen as either the shadows or profiles of birds, or alternatively as blue sky background. 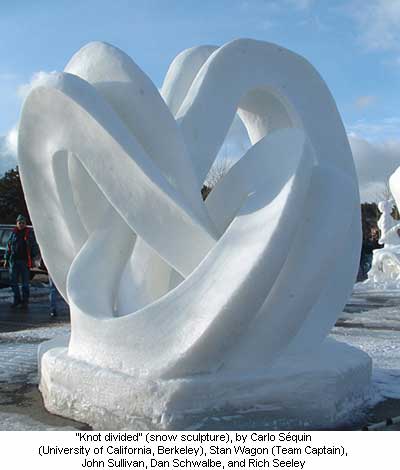 Can a DIVIDED KNOT be NOT DIVIDED? When carving this sculpture out of a 10x10x12 foot block of hard compacted snow, we started with the simplest possible knot: the overhand knot, also known as the trefoil knot. We then split lengthwise the whole ribbon forming the three big loops. But there is a twist that may lead to surprises: The original knotted strand was actually a triply twisted Moebius band! Thus the question: Does our cut separate the structure into two pieces, or does it form a single, highly knotted twisted strand? Read more about this snow sculpture. 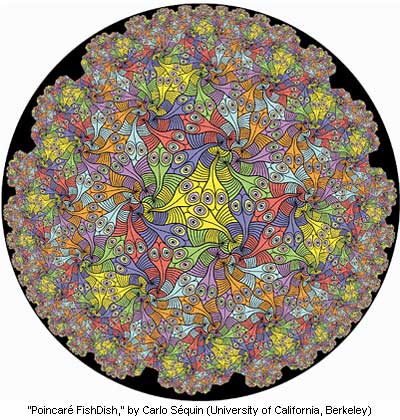 A tiling with regular heptagons does not fit into the Euclidean plane, since 3 times the dihedral angle of the heptagon exceeds 360 degrees. But if we are willing to introduce a progressive scale factor, then the whole hyperbolic plane can be fit into the Poincaré disc. Here is a visualization of a {7,3} tessellation where 3 heptagons join at every vertex, using a tiling motif inspired by the famous Dutch artist M.C. Escher. Each heptagon is cut into 7 identical pizza slices with irregular boundaries in the shape of fish that properly interlock with one another. See more tiling patterns on the Poincare disc. 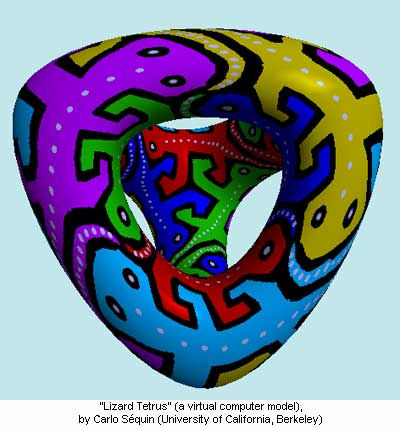 24 Lizard tiles, inspired by one of the many planar tilings by M.C. Escher, are mapped around a rounded tetrahedral frame of genus 3. This tiling is a contorted version of the pattern of 24 heptagons displayed on the surface of the marble sculpture "Eight-fold Way" by Helaman Ferguson. That sculpture celebrates Felix Klein's famous "Quartic Curve" which achieves the maximal symmetry of 168 automorphisms possible on a genus-3 surface. Read more about patterns on the Tetrus surface. Thanks to Pushkar Joshi and Allen Lee for their help with mapping Escher tiles onto the tetrus. 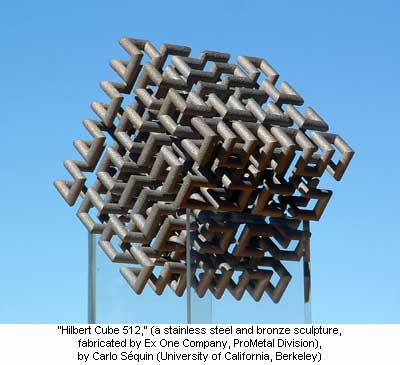 "Hilbert Cube" is a space-filling recursive curve in 3 dimensions in analogy to the famous Hilbert curve in the plane. Special care has been taken never to place more than 3 coplanar line segments in sequence. At the largest recursion step the geometry has been slightly altered so as to obtain a closed loop. In the proper parallel projection one can see that the 2 halves of this sculpture are connected by only 2 tube segments. This piece of art gives me the association of an abstract, constructivist model of the human brain. See more views of the "Hilbert Cube 512". 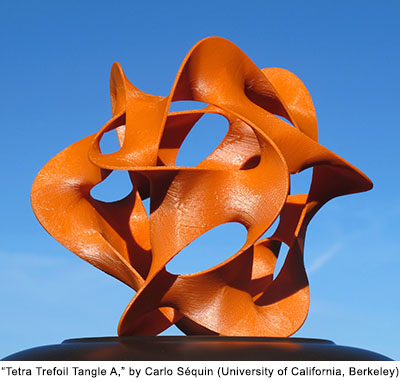 14 x 14 x 14 cm, PLA, 3D-print, May 2018. Four trefoil knots are placed onto the faces of a tetrahedron and suitable expanded so that they extend beyond the tetrahedral edges, where their lobes then interlink with their neighbors. A soap-film-like surface is then formed between those four border curves, approximating a minimal surface. This 2-manifold is single-sided and of genus 10.