The mathematics used in weather forecasting may also help predict the spread of brain cancer (also called glioblastoma). Like the weather, a cancer's growth is chaotic in nature. A new algorithm for weather prediction is the Local Ensemble Transform Kalman Filter, which, as explained in the article, makes a forecast by synthesizing samplings from areas that are deemed the least predictable. This algorithm uses statistical techniques to analyze chaotic systems and is therefore relevant to the spread of cancer.

Mathematician Eric Kostelich is interviewed about how this method for forecasting next week's weather might extend to a method of forecasting the next six weeks of growth of a brain tumor. As part of a research team including cancer researchers, Kostelich published findings about cancer in December in the journal Biology Direct. Kostelich points out that just as small improvements in weather forecasting have saved many lives, even forecasting the direction or manner in which a tumor grows might greatly improve diagnosis and treatment. The fact that most brain cancers are inoperable was part of his teams' decision to focus on brain cancer as opposed to other cancers.

RSA, an algorithm for public key cryptography has recently been found by several computer scientists to be susceptible to attack due to the over-use of certain large primes in creating keys. SSL (Secure Sockets Layer) certificates are used for website security, and are issued by only a small number of multi-national companies. Mathematician David Speyer writes "Key generators choose random pairs of primes from a set of size 10151, multiply them, and hand out the products. With such a large range of primes to choose from, they should never need to reuse. But, apparently, they do. Some primes, it seems, are the Times Square of 300 digit primes. In a sampling of 4.7 million RSA keys from around the internet, one particular prime turned up 12720 times! The researchers estimate that as many as 2 in every 1000 RSA keys may be vulnerable in this way. Speyer then gives a short introduction to the mathematics that could be used to attack the encryption when too many keys are based off the same prime numbers. Comments include some ideas for solutions to the problem.

A mathematician-biologist at the University of Utah has built a math equation that could save the lives of hundreds of Americans who die each year of acetaminophen overdoses. Fred Adler's equation, which appears in the journal Hepatology, offers a way for doctors to quickly determine the timing and severity of the overdose based on biomarker values from a standard blood test. Such insight is particularly valuable in acetaminophen overdoses because patients are often comatose, making acquisition of critical information difficult, and early arrangement of a liver transplant, if needed, is crucial. Adler explains that "math helps you see the invisible," for cases such as drug overdoses in which doctors are unable to immediately, directly observe the liver damage caused. Adler's equation correctly predicted survivorship in 49 of 53 cases in a retrospective study, but more testing is needed to prove reliability before doctors can start applying the equation in the examining room. 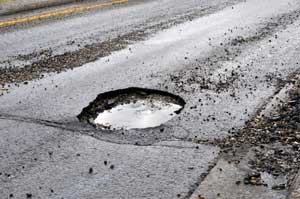 Keeping the streets of any city free of potholes is one of those impossible tasks. The city of Boston has a new weapon in its arsenal, smartphones armed with math algorithms to detect potholes. Massachusetts based InnoCentive organized a web-based challenge where anyone could submit a strategy to detect potholes and three different submissions received a $9000 prize. Undergraduates Nathan Marculis and SaraJane Parsons developed a method using wavelets and Kruskal clustering. A team headed by MIT grad Michael Nagle came up with a way of measuring the size of a pothole and distinguishing between potholes and railway crossings. A third winner Elizabeth Yip of Washington also received a prize. The three algorithms are now being merged into one mobile phone app that will be made available to the public.

In this personal perspective piece, the author discusses some of his experiences teaching mathematics to prison inmates and high school drop-outs. "I had strong anti-mathematical and sentimental leanings as a child," he wrote, but fell in love with mathematics when he was an adult and studied the subject "with great pleasure but little talent." He developed an affinity for the intuionism of L.E.J. Brouwer and writes, " I always liked the idea of building all of maths from the human experience of a moment of time." It was not easy trying to get his students to share in his aesthetic appreciation of mathematics, particularly the prison inmates. Both the inmates and the drop-outs cared more about job applications than about mathematics, but the latter group "were more curious and willing to peer across the glassy, abstract region of mathematics. That's what I wanted. With them I could be a tour guide and not simply teach a drab handful of methods."

In this article, journalist Lynne Minion writes about an episode of the radio show Afternoons, which host Genevieve Jacobs devoted to the subject of math and why people either love it or hate it. Jacobs interviewed several math professors, a radio host (and self-professed math geek), and the 2010 Australian Sudoku champion, among others. Interviewees spoke about what drew them to math: radio host Adam Spencer described how math "simply made sense from an early age" while Australian National University professor Michael Barnsley spoke of how he "fell in love with fractal geometry." They also described the role that math teachers should play in their students' appreciation for the subject: for example, Professor of Mathematics Education Celia Hoyles stated that "I think most young children really start being intrigued by mathematical ideas. ... I think we have to work very hard so that we don't put them off and keep their interests engaged."

"At the Blackjack Ball, Card Counter Dr. Edward Thorp Is King," by R.M. Schneiderman. The Daily Beast and Newsweek, 13 February 2012.

Scientists including the famous DNA-discoverer Francis Crick toiled for years to understand human consciousness, but the parallels between consciousness and the fundamental axioms of mathematics reveal that the problem might not be solvable. Austrian logician Kurt Gödel demonstrated that mathematical systems such as arithmetic must be based on at least one axiom that cannot be proved true within the system, and therefore there is no set of self-consistent axioms for deducing all of mathematics. Similarly, as Douglas Hofstadter explains in his book "I Am a Strange Loop," consciousness--like a set of mathematical principals--is a feedback loop that references symbols it has generated itself. Just as Gödel's work enriched the field of mathematics, thinking of consciousness as a "strange loop" may lead to a better understanding of how the biological and chemical processes within the brain work together to make us who we are.

Math and economics are familiar bedfellows, but it's a rare study that examines the economics of mathematics. George J. Borjas of the Kennedy School of Government and Kirk B. Doran of Notre Dame have used a "natural experiment"--the migration of physicists and mathematicians to the U.S. immediately prior to and during the collapse of the Soviet Union--to explore how the presence of highly-skilled workers affects the productivity of their colleagues and competitors. In contrast to the experimental sciences, which suffered from a lack of resources and lagging technology, the theoretical sciences thrived in the U.S.S.R. Mathematics and theoretical physics served as a refuge from Party politics - and stifling repression - for many bright minds. Mathematical development in the U.S.S.R. diverged widely from that in the U.S., due to different historical conditions and a dearth of communication between the two countries. While mathematicians in the U.S.S.R. took a liking to differential equations ordinary and partial, mathematicians in the U.S. focused on statistics and operations research. (The fields exhibiting the biggest differences in the two countries were integral equations--half again more developed in the Soviet Union than in the U.S.--and statistics--which saw about 17 times more publications in the U.S. than the U.S.S.R. Readers may not be surprised to discover that other fields of Soviet specialty were probability and stochastic processes - thanks to Kolmogorov and his school--and analysis on manifolds--thanks to Kolmogorov's student Arnold, and his students in turn. In the absence of Milnor and Bott, the topology of manifolds never saw the light of the Soviet day, and American computers allowed American mathematicians to make greater strides in computer science and numerical analysis than their Soviet counterparts.) All this changed when the Soviet Union began to fall apart. According to Borjas and Doran, 336 Soviet mathematicians migrated to the U.S. as a result. Examining a database containing every mathematical publication in the last 70 years, the two found that the eastern emigres had a significant negative impact on western mathematicians working in "Soviet-style math". While new ideas and theorems enriched their fields, these mathematicians had a harder time publishing "home-run" papers than their colleagues in the lee of the Soviet tide. Many were pushed into lower-tier academic positions, or out of academia altogether. And although the students of Soviet emigres have been more productive than their native-advised counterparts, these productivity gains are more than made up for by the losses in productivity suffered by students in Soviet-dominated areas with non-emigre advisors. This lost generation of U.S.-born mathematicians must be balanced against the new ideas and new directions the Soviet mathematicians brought with them, and the refuge they found here.

Be sure to check out the link to the very entertaining and interesting 1990 New York Times article, starring Persi Diaconis and representation theorist Victor Kac, which Times science writer Gina Kolatta penned while the migration was in full throttle.