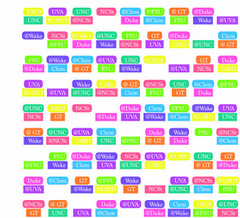 One of the greatest baseball players ever, Ted Williams, said, "I think without question the hardest single thing to do in sport is to hit a baseball." Yet it may be even harder to make sure that there are teams at the stadium to play each other in the first place. Scheduling games for a league’s entire season (in baseball it’s 30 teams playing 162 games each in six months) involves meeting many constraints, such as each team having the same number of home games, and not having too many consecutive days off or consecutive days playing. Graph theory, linear algebra, and integer programming are among the mathematical subjects that make scheduling a season possible and faster. The results are schedules that satisfy fans, players, owners, and broadcasters.

The schedules are economically advantageous, too, boosting television revenue by having desirable matchups on desirable days, and holding down travel costs. Some scheduling algorithms set up all the home and away dates first, then fill in the teams, while others reverse those steps. One commonality is subdividing the main problem into smaller clusters that are both easier to solve and able to be fit back together consistently. These techniques, part of a field called combinatorial optimization, aren’t just for fun and games either--they’re also used to create efficient delivery routes and to design experiments to test new drugs.