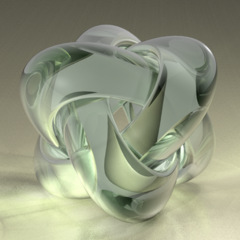 In the image (at left), no two rings are linked to one another, yet the three rings, called Borromean rings, stay together. They are a part of a field of mathematics known as knot theory and are especially interesting because of this apparent paradox, which can be extended to more than three rings. Nice, but are they good for anything? Yes. The rings also offer challenging targets for synthetic chemists who create molecules with the same geometric and spatial properties. In physics, there are quantum states that are physical manifestations of the rings. These states were predicted about 50 years ago and have recently been experimentally confirmed. Borromean rings--intriguing shapes with no application? KNOT!

Lord Kelvin initiated the scientific study of knots about 150 years ago as a way of understanding atoms and the elements. Although that endeavor failed, mathematicians retained their interest in the subject and developed ideas that now aid in modern applications. The structure and behavior of proteins can be modeled with knots. And knots, along with related structures, braids, help solve problems in statistical and quantum mechanics. So, like the objects it studies, knot theory – born from an application and continuing to find new applications – has come full circle.