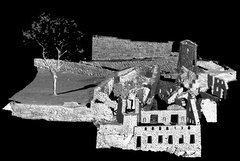 Ancient sites are fascinating, but their exposure to the elements and to human intervention is often devastating. Archaeologists and engineers are using lasers to scan many ancient structures to create three-dimensional images that won’t suffer from pollution or vandalism. Areas of mathematics such as vector analysis and linear algebra help convert the billions of measurements from the laser beams into coordinates and then align readings from repeated scans to achieve images that are accurate to within a millimeter. This process not only preserves structures digitally but also is solving many mysteries about their construction.

Calculations from lasers are also providing valuable information about the world’s forests with scans from the air--and, soon, space--that are impractical to do on the ground. The data collected gives ecologists their first exact measures of statistics such as the density of forests, which allow them to conclude how much carbon dioxide forests consume and how fires affect different species. For foresters it’s a race against time, since destruction moves swifter than growth, and the same is true for researchers in laser scanning who need faster, more efficient algorithms to process the generated data.