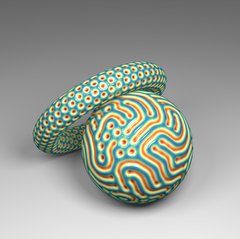 Some people actually appreciate wrinkles. Whether in skin, fabrics, or plastic wrap, wrinkles form because stretched materials assume shapes that minimize their bending energy. Geometry and partial differential equations are two of the mathematical subjects used in the study of wrinkling. This study helps in understanding a wide range of topics, such as the behavior of thin films, how flowers bloom, and--in the case of the items pictured--the possibility of objects changing shape in flight to improve their aerodynamics.

Much research into wrinkling focuses on the interplay between a hard outer layer and a soft inner layer, such as is present in our skin on top of the underlying tissue. Until recently, modeling wrinkles seemed to depend on many parameters, but a team of researchers made the surprising discovery that with spherical surfaces only two parameters were important: the curvature of the inner layer relative to the thickness of the outer layer and the pressure on the outer layer. More curvature and less pressure led to dimples arranged in a hexagonal crystal pattern, while less curvature and increased pressure caused the formation of complicated furrows, such as those seen in fingerprints. The team hopes to extend its work to other shapes but their work could help describe the formation of structures ranging from the microscopic to the surfaces of planets.