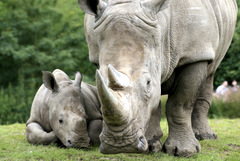 Poachers slaughter rhinos and elephants by the thousands every year for their horns and tusks. Unfortunately there aren’t enough rangers to patrol the vast territories where the animals roam, so poachers can kill and profit with little fear of capture. Recently a team of computer scientists gathered data on animals’ locations, previous poaching activity, weather, etc. and used probability and graph theory to help put each team of drones and rangers in the right place at the right time. In the first test of their algorithm that assigns patrols, rangers arrested poachers within minutes of them exiting their vehicle--just before they climbed a fence separating them from a female rhino and her calf.

Positioning patrols is an example of a spatio-temporal optimization problem, in which actions are coordinated to maximize a certain quantity, in this case the expected number of live animals. Doing the calculations to find the best solution takes too much time (rangers must act quickly), however, so the researchers made some assumptions that simplified the problem and allowed them to find strategies in real time that may not have been the best ones, but were still very effective. These solutions stopped poachers while the rangers were nearby and then kept them away afterward.