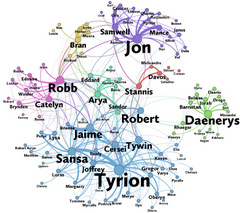 Who is the real hero of the television series Game of Thrones and book series A Song of Ice and Fire? To help answer this, mathematicians used network science (applied graph theory) to analyze and create a pictorial representation of the third book’s characters and the connections among them. They then looked at different measures of importance--in graph theory terms, centrality--and Tyrion Lannister emerged as the leader in all but one of the measures. The answer may not be resolved for the entire series, but one thing is clear: Thinking about Game of Thrones is a lot safer than playing it!

The researchers constructed this network by first gathering data based on the proximity of characters’ names in the text of the book. Probability, combinatorics, and numerical approximation were used to detect groupings among characters, and the algorithm successfully identified seven logical and coherent communities without any prompts or hints. The resulting network, despite being based on fiction, shares many characteristics with real-world networks, such as a small number of people playing an outsized role in the network. Discovering this information is nice, but network and graph theory have many other applications of greater significance, such as understanding the flow of information and modeling the spread of disease.