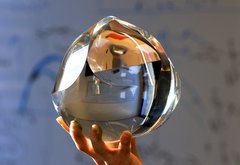 This unusual shape has a special property: It has one balance (equilibrium) point that is stable and one that is unstable. If you jostle the shape away from its stable balance point, at the bottom, it will always right itself and settle back to that point. At its unstable point, on top, the shape can balance, but the slightest disturbance will knock it off balance and it will return to resting at the stable balance point, as it does when placed down in any other position. In the 1990s a mathematician conjectured--despite widespread belief--that such a shape made up of the same material throughout (no weights) was possible, but its existence wasn’t confirmed until about ten years ago. Two Hungarian researchers, combining geometric thinking, mathematical software, and extremely precise manufacturing, created what is now known as a Gömböc, which is Hungarian for spherelike.

It can be proven that no such shape is possible in two dimensions. The same proof, however, fails in three dimensions. When confronted with that failure, instead of giving up, the two researchers righted themselves and took the failure of the proof as a hint as to how to construct the shape. After spending years deducing properties of the elusive shape and gathering data (including searching through thousands of pebbles), ultimately they created the first Gömböc. That didn’t stop their search for naturally occurring Gömböcs, though. Eventually they found two species of tortoises with Gömböc-like shells that enable them to flip over from their backs (not just unstable but also potentially fatal) to right-side up.