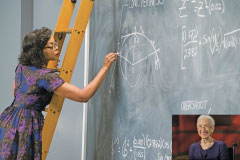 The book and film Hidden Figures tell the true story of African-American women who worked as “computers” for NASA in the early days of the space program. Among the film’s many memorable moments is when future Presidential Medal of Freedom winner Katherine Johnson (pictured) figures out how to solve the differential equations that describe a space capsule’s orbit and re-entry so that it will splash down close to its intended target. Using her work, the machines that we now call computers then calculated the precise trajectory. And in today’s world, that would have been the end of it. But the astronaut John Glenn, whose life depended on the calculations being correct, insisted that the human computer, Katherine Johnson, verify the machine’s work. Only then was he confident that he could rocket into space and return home.

Hidden Figures is a triumphant tale but an unfinished one. Even today, the proportions of women and African Americans who work in mathematics are smaller than those proportions in the general population, which is ironic for a profession that puts so much emphasis on logical thinking. Many in the mathematics community are working to create programs that encourage broader participation, so that future Katherine Johnsons are an integral part of the profession … and not hidden.