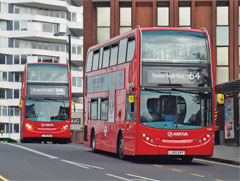 Bus riders often wait a long time for their bus and when it finally arrives there’s another bus right behind it--a frustrating problem known as bus bunching. It’s a problem that tends to compound itself because a late bus will have more passengers waiting for it, resulting in longer boarding times, which makes the bus even later. And early buses encounter fewer passengers, thus creating shorter boarding times, and wind up getting increasingly earlier. Traffic and the random nature of the number of people who show up at each stop combine to make unbunching buses a complex problem. Some transit systems use technology to track buses while employing control theory based on ordinary differential equations to treat buses as if they are connected by springs. Drivers of those that are bunched are given instructions to stretch the gap between buses, and those that are too far apart get directions that pull them closer together.

Researchers have tested solutions in simulations using mathematical models and on the road with real bus routes. The most successful approaches are those that focus on individual buses—giving drivers immediate feedback and letting them make decisions based on traffic—rather than trying to control the entire system. Solving the problem helps passengers and non-passengers alike by keeping people in the public transit system and distributing those people more evenly, so that a jam-packed bus isn’t followed a minute later by a relatively empty one, which is a waste of fuel, equipment, and labor.