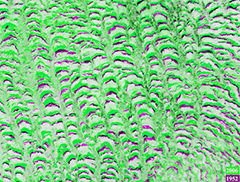 Math is often described as the science of patterns, which makes it a natural subject to help in the study of the underlying causes of patterns found in nature, for example, bands of vegetation that often occur on gently sloped terrains in certain near-desert ecosystems worldwide. We are starting to learn more about these bands’ common properties by using mathematical models built on data, such as rainfall totals and the curvature of the terrain. The models incorporate partial differential equations and confirm observations that bands tend to be concave (u-shaped) facing up the slope in the most arid environments. The models’ conclusions are validated by observations, and they provide a beginning to understanding the bands. This understanding can help us preserve them before they are destroyed either directly or indirectly by humans and become deserts, where restoring plant life is almost impossible.

Teams of ecologists, hydrologists, and mathematicians have recently refined their models to allow for different time scales. The new models incorporate fast phenomena, such as overland water transport during storms, along with slower effects, such as vegetation growth. One very slow effect, which is an emergent property of the model, is an actual up-slope movement of the bands, the speed of which is captured by the new models without any fine-tuning of parameters (not breakneck speed—we’d have to wait centuries for these bands to drift up the gentle grade by a full wavelength of the pattern). A band traps water and nutrients that have flowed down-slope, and they promote growth on the up-slope side of the band. Although moving vegetation sounds strange, if not impossible, the movement is confirmed by observation. Note: Although the researchers involved in the study have observed and followed bands around the world, they are not quite ready to be called groupies.