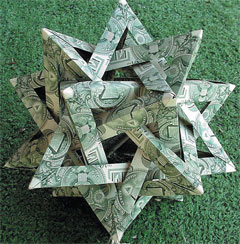 Origami—paper-folding—may not seem like a subject for mathematical investigation or one with sophisticated applications, yet anyone who has tried to fold a road map or wrap a present knows that origami is no trivial matter. Mathematicians, computer scientists, and engineers have recently discovered that this centuries-old subject can be used to solve many modern problems.The methods of origami are now used to fold objects such as automobile air bags and huge space telescopes efficiently, and may be related to how proteins fold.

Manufacturers often want to make a product out of a single piece of material. The manufacturing problem then becomes one of deciding whether a shape can be folded and if so, is there an efficient way to find a good fold? Thus, many origami research problems have to do with algorithm complexity and optimization theory. A testament to the diversity of origami, as well as the power of mathematics, is its applicability to problems at the molecular level, in manufacturing, and in outer space.

For More Information: "When can you fold a map?," Arkin, et al.