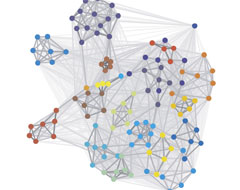 Votes are cast by the full membership in each house of Congress, but much of the important maneuvering occurs in committees. Graph theory and linear algebra are two mathematics subjects that have revealed a level of organization in Congress—groups of committees—above the known levels of subcommittees and committees. The result is based on strong connections between certain committees that can be detected by examining their memberships, but which were virtually unknown until uncovered by mathematical analysis.

Mathematics has also been applied to individual congressional voting records. Each legislator’s record is represented in a matrix whose larger dimension is the number of votes cast (which in a House term is approximately 1000). Using eigenvalues and eigenvectors, researchers have shown that the entire collection of votes for a particular Congress can be approximated very well by a two-dimensional space. Thus, for example, in almost all cases the success or failure of a bill can be predicted from information derived from two coordinates. Consequently it turns out that some of the values important in Washington are, in fact, eigenvalues.