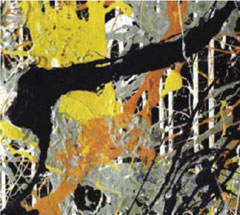 Mathematics is not just numbers and brute force calculation—there is considerable art and elegance to the subject. So it is natural that mathematics is now being used to analyze artists’ styles and to help determine the identities of the creators of disputed works. Attempts at measuring style began with literature—based on statistics of word use—and have successfully identified disputed works such as some of The Federalist Papers. But drawings and paintings resisted quantification until very recently. In the case of Jackson Pollock, his paintings have a demonstrated complexity to them (corresponding to a fractal dimension between 1 and 2) that distinguishes them from simple random drips.

A team examining digital photos of drawings used modern mathematical transforms known as wavelets to quantify attributes of a collection of 16th century master’s drawings. The analysis revealed measurable differences between authentic drawings and imitations, clustering the former away from the latter. This is an impressive feat for the non-experts and their model, yet the team agrees that its work, like mathematics itself, is not designed to replace humans, but to assist them.

For More Information: “The Style of Numbers Behind a Number of Styles,” Dan Rockmore, The Chronicle of Higher Education, June 9, 2006.