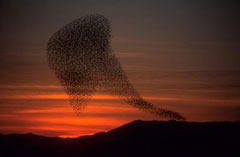 The collective motion of many groups of animals can be stunning. Flocks of birds and schools of fish are able to remain cohesive, find food, and avoid predators without leaders and without awareness of all but a few other members in their groups. Research using vector analysis and statistics has led to the discovery of simple principles, such as members maintaining a minimum distance between neighbors while still aligning with them, which help explain shapes such as the one at left.

Although collective motion by groups of animals is often beautiful, it can be costly as well: Destructive locusts affect ten percent of the world’s population. Many other animals exhibit group dynamics; some organisms involved are small while their groups are huge, so researchers’ models have to account for distances on vastly different scales. The resulting equations then must be solved numerically, because of the incredible number of animals represented. Conclusions from this research will help manage destructive insects, such as locusts, as well as help speed the movement of people—ants rarely get stuck in traffic.