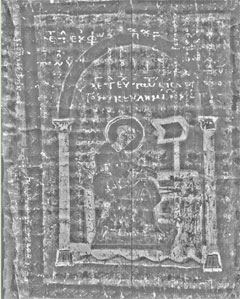 Archimedes was one of the most brilliant people ever, on a par with Einstein and Newton. Yet very little of what he wrote still exists because of the passage of time, and because many copies of his works were erased and the cleaned pages were used again. One of those written-over works (called a palimpsest) has resurfaced, and advanced digital imaging techniques using statistics and linear algebra have revealed his previously unknown discoveries in combinatorics and calculus. This leads to a question that would stump even Archimedes: How much further would mathematics and science have progressed had these discoveries not been erased?

One of the most dramatic revelations of Archimedes’ work was done using X-ray fluorescence. A painting, forged in the 1940s by one of the book’s former owners, obscured the original text, but X-rays penetrated the painting and highlighted the iron in the ancient ink, revealing a page of Archimedes’ treatise The Method of Mechanical Theorems. The entire process of uncovering this and his other ideas is made possible by modern mathematics and physics, which are built on his discoveries and techniques. This completion of a circle of progress is entirely appropriate since one of Archimedes’ accomplishments that wasn’t lost is his approximation of π.