Stephen Lamontagne, who attends Barrington High School, made Pi Day 2011 memorable by winning US$3000 from the AMS and a TI-Nspire graphing calculator from Texas Instruments playing Who Wants to Be a Mathematician at Providence College on March 14. Stephen and the seven other high school students from Rhode Island competed in front of a packed house and at the end of the contest received congratulations from Rhode Island Governor Lincoln Chafee. 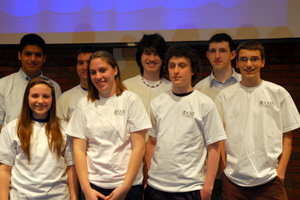 
(Photo on the left by Terry Coes.)

Not to be outdone, AMS employees Sheila Rowland and Shirley Hill sported t-shirts from their Spring Pi collection: 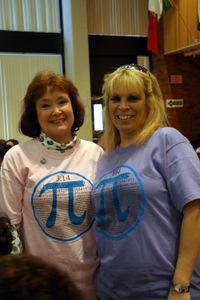 Videos of the contest

Rhode Island Governor Lincoln Chafee then handed out awards for the contestants. Here are all the prizes and money won that day.

More images from the competition:

The AMS thanks sponsors Texas Instruments, Maplesoft, John Wiley and Sons, and LaSalle Bakery for their generous support of Who Wants to Be a Mathematician. Thanks also to Lynne DeMasi of the Providence College Department of Mathematics and Computer Science who helped arrange things for the Pi Day competition.

Uncredited (until now) photographs by Who Wants to Be a Mathematician judge and co-creator Bill Butterworth (DePaul University Department of Mathematical Sciences), AMS Public Awareness Officer Annette Emerson, and Managing Editor of the "Notices of the AMS" Sandy Frost Breen. Videos by Bill Butterworth. Text by AMS Public Awareness Officer and Who Wants to Be a Mathematician host Mike Breen.