"I really appreciate that you made this opportunity available to the students at ARML. Thank you for running this."

"Thanks for working so hard to organize the event! We were glad to have you at ARML." 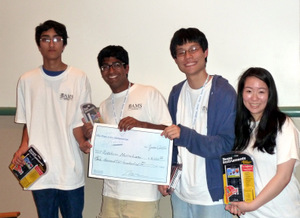 A team from Western Massachusetts (above) won US$3200 and four TI-Nspire CX graphing calculators playing a team version of Who Wants to Be a Mathematician at the 2012 American Regions Mathematics League competition at Pennsylvania State University on Friday, June 1. Just before the start of Who Wants to Be a Mathematician, torrential rain fell on the campus, which resulted in some very wet contestants and audience members. The weather also caused two of the teams who were scheduled to play to miss the game, so each game featured three teams, instead of the usual four. Almost all of the contestants are pictured below (the AAST/Bergen team was still getting soaked when the picture was taken).

In game one, Vermont led at the halfway point, 50 points ahead of Western Massachusetts. The latter team took the lead after question five and held first place for the rest of the game. All the contestants answered the very difficult final question about combinatorics, and a little geometry, correctly. The win earned the Western Mass team $600 and four TI-Nspire CX graphing calculators. 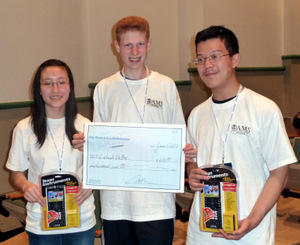 (Left to right: Pheobe Cai, Eric Schneider, and Anderson Wang. Not pictured: Matt Rauen, who had to rush off to another event)

Western Mass and Lehigh Valley went against each other in the Square-Off Round. It was very close, but Western Mass signaled in first with the correct answer to win another $600 and a chance at the $2000 Bonus Question. The team worked intensely on the Bonus Question, which involved geometry and algebra, and answered correctly to add $2000 to its winnings.

Here are the prizes won by the teams:

The AMS thanks sponsors Texas Instruments, Maplesoft, and John Wiley and Sons for supporting Who Wants to Be a Mathematician.

Who Wants to Be a Mathematician Alumni alert