Dr. Young presented his work to Congressional representatives and other interested attendees by explaining:

"In our work to enhance efficiencies in our nation’s power grid, we employ tools from theoretical graph theory. To see how this works, we consider a graph with each vertex colored either blue or white. If a white vertex is adjacent to a blue vertex, and it is the only white vertex adjacent to that blue vertex, then the white vertex switches to blue. This process is referred to as the zero forcing. If the white vertices of a graph all turn blue under this process, then the beginning set of blue vertices is a zero forcing set of the graph.

Zero forcing can be used to determine where to place Phasor Measurement Units (PMUs) in an electric grid. These units measure voltage and current locally in a power grid and can be placed strategically to obtain measurements for the entire grid. More specifically, given the data that a PMU measures locally in a grid, Kirchhoff's law and Ohm's law allow for the entire grid to be measured if the PMUs form a power dominating set (meaning that these locations and their neighbors in the graph form a zero forcing set). According to the Department of Energy, the average overall cost per PMU in 2014 (cost for procurement, installation, and commissioning) ranged from \$40,000 to \$180,000. Thus, minimizing the number of PMUs installed is desirable." 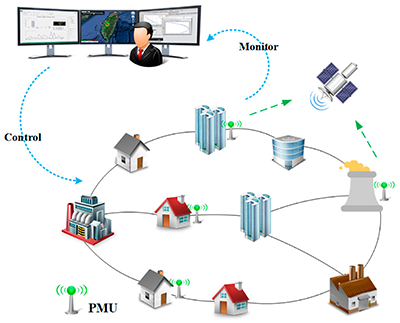 The Coalition for National Science Funding (CNSF) is an alliance of over 130 organizations united by a concern for the future vitality of the national science, mathematics, and engineering enterprise. CNSF supports the goal of increased national support for the National Science Foundation's (NSF) research and education programs. The CNSF Exhibition is a well-attended annual event that features thirty-five exhibits where researchers present their work and explain the critical importance of sustained federal investments in basic scientific research.

Learn more about CNSF and its Capitol Hill exhibitions.

Michael Young is an Associate Professor of mathematics at Iowa State University (ISU). His primary research area is Discrete Mathematics, particularly graph theory and combinatorics. Recently, he has had a focus on equity in the mathematics classroom and is responsible for establishing the Mathematicians of Color Alliance (MOCA). MOCA is a group of minority graduate and undergraduate mathematics students whose goal is recruitment, retention. and mentoring of underrepresented students by creating a presence in the department, on campus, and around the nation. In addition, Dr. Young is co-director of ISU’s Postbaccalaureate Certificate in Mathematics.