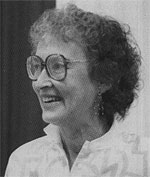 The Satter Prize recognizes an outstanding contribution to mathematics research by a woman in the previous six years.

This prize was established in 1990 using funds donated by Joan S. Birman in memory of her sister, Ruth Lyttle Satter. Professor Birman requested that the prize be established to honor her sister's commitment to research and to encourage women in science. An anonymous benefactor added to the endowment in 2008.

The current prize amount is $5,000 and the prize is awarded every 2 years.

Submit a letter of nomination describing the candidate's accomplishments including complete bibliographic citations for the work being nominated, a CV for the nominee, and a brief citation that explains why the work is important.